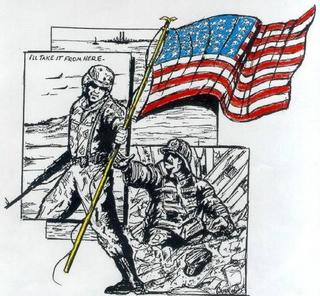 They were the first troops to die as the war began nearly four year ago. Most of them didn't have time to realize that. They were too busy working hard in unimaginable conditions, racing the clock in their valiant efforts to save innocent lives.

They are the 343 FDNY firefighters who died at in the Twin Towers of the World Trade Center on September 11, 2001.

Just as did our 1,846 honored military troops who have made the supreme sacrifice for their country to date, the 9/11 firefighting heroes died in the line of duty, doing the job that they had dedicated themselves to do--saving and protecting civilians. Their courage in the face of such overwhelming horror, and their steadfast devotion to duty in the midst of such evil chaos, still has the power to chill my skin each time I think of it.

And I think of it often.

9/11 touched New Yorkers deep in the core of their beings. I have lived in California for half my life, but I was born and raised in New York. Most of my extended family still lives there. In fact, I spent much of 9/11 trying to reach anyone in the family by telephone, to find out if my FDNY cousin was alive. At about 2:00 p.m. Pacific time, I got a call from my sister-in-law, letting me know that Brian was okay.

But 343 others were not. The FDNY deaths of 9/11 hit close to uncounted thousands of homes, including those of my relatives. One of my brothers is a coworker of the late Chief Richard Prunty's brother. My youngest brother, and my sister, both lost firefighting friends. My cousin Brian probably lost count of how many funeral he attended for his firefighting brothers.

Many decades ago, my late father lost his father, his brother, and his uncle in the FDNY line of duty. Because of this family history, I feel a soulful connection to the 9/11 heroes and their grieving loved ones. Remember that, just as we Americans are blessed with our military forces, we are fortunate as well to have our brave firefighters who set a sure boot against danger for our benefit.

The fallen heroes of FDNY, the first fighting casualties of the GWOT, represent 343 of the many thousands of reasons why the post-9/11 world is forever changed. They were all that is good, strong, and noble, and their sacrifice is a sad and constant reminder of how much we have lost.
Posted by Kathy Carroll at 10:39 PM