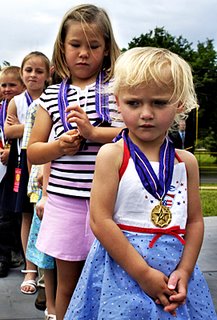 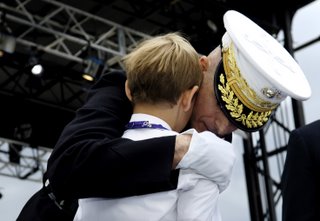 There was a special ceremony for the children of fallen heroes, both military and civilian, a "Time of Remembrance," on May 21, 2006. It was held near the Washington Monument in our nation's Capitol. The medals these children are wearing were designed specially for them.

The enormity and nobility of the sacrifices of our men and women in Iraq and Afghanistan often become obscured in the heat of political rhetoric. These young faces remind us of the imponderable price of freedom.

Memorial Day is next weekend. Remember the men and women of our armed forces overseas. Say a prayer for those who, because they were called to serve a great cause, can not be here to help their children grow up.

Support our troops. We owe them far more than a grateful nation can ever repay.

Posted by Kathy Carroll at 2:22 PM