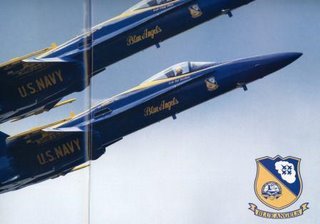 The Mets-Cardinals playoff game is rained out tonight in St. Louis, so this is a good opportunity to catch up with another favorite topic, our troops.

This past weekend, the Navy's Blue Angels were in San Diego for the annual Miramar Air Show. Although I've watched the Angels flying their magic for over 20 years, as I live very close by the air station, I never actually went to the event. So seeing the jets up close was a treat. (The crease in the photo at right is the centerfold in my program book.)

I walked all over the show grounds and enjoyed talking to as many service personnel as I could. It was so refreshing to hear from the young men and women of our armed forces, who are actually doing the heavy lifting in this war, and not listen to the twisted, filtered MSM reports that always try to make things appear as black as possible. I spoke with troops from the Midwest, the Rockies, the South, the East Coast, as well as hometown kids from California. These inspiring young people were smiling, personable, excited about their jobs and eager to step into the breach for our country. Several had been to Iraq more than once and were looking forward to going back yet again.

One young Marine I talked with had not yet been to Iraq but is scheduled to ship out next month. I asked him if he really wanted to go. "Heck, yeah, ma'am! That's what I signed up for!"

To a person, each and every one demurred at being thanked for their service. They are a national treasure, and I told them so. We would certainly be in deep trouble without them.

There is a price to be paid for this national treasure we call our military. Some of our troops are not blessed with a homecoming to their loved ones. Many leave small children behind. A friend and reader who is a Navy veteran suggested I post a link to the Snowball Express. As the holidays approach, please consider the Snowball Express as one of your charitable contributions for the season. We can never repay what has been taken from these children of heroes, but we can provide them with a day of smiles at Disneyland.

It seems such a small thing to do, but it at least extends our appreciation and our gratitude.
Posted by Kathy Carroll at 7:20 PM