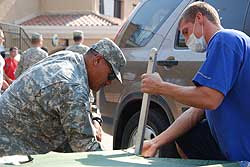 ...probably the most proactive response to a domestic event that I have seen in my 40 years in uniform...and we continue to be flexible and agile to meet the needs of Gov. Schwarzenegger and the citizens of California.
~ Lt. Gen. H Steven Blum, chief of the National Guard Bureau.

Everyone I've talked with about it is annoyed.
There was no mention of politics in the midst of California's disastrous wildfires last week, until both John Garamendi and Barbara Boxer grabbed the mikes.
They both proclaimed that the Iraq war has depleted California's National Guard to the point of dissolution. Garamendi made a particular jackass out of himself on Neil Cavuto's show, insisting that the war in Iraq had absorbed all of our National Guard "resources." If either of these ax grinders had bothered to check the facts, they would know that 17,000 California Guardsmen are at the ready, right here in state.
Initially, Gov. Schwarzenegger requested 1,500 Guardsmen to respond to Southern California's firefighting and relief efforts. By week's end, the number had risen to over 2,500 California National Guard troops, who seem to be everywhere; San Diegans have seen them on the news, at the evacuation points, on the roads.
Political grandstanders like the lieutenant governor and the senator, we don't need them at our time of crisis. They know nothing about the people of San Diego who are suffering as a result of these devastating fires, and they care even less. They certainly don't have enough decency to keep politics out of natural disaster. And they realize even less how stupidly self-absorbed they are, touting their own political agendas at a time of great personal tragedy for so many Californians.
Never let the real story get in the way of a good sound bite. I'm glad I never voted for either one of them--and never will.
Posted by Kathy Carroll at 11:45 AM