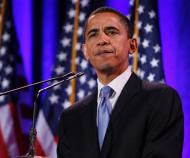 Victor Davis Hanson never fails to remind me why I'll never be a liberal Democrat. I've never liked baloney, and the Dems dish up way too much of it. Most recently, in Barack Obama's you-can't-be-serious "race" speech today.

It gives me heartburn to think Obama expects us to swallow this garbage. "A More Perfect Union," my ankle. "A More Perfect Onion" is more like it. This confirms Obama's long-simmering superiority complex, which is now locked into overdrive and about to vault him over the disaster cliff.

I may be white, but I'm not stupid, Senator O. What "racial stalemate" are you referring to? You're the one running for president, you're the Ivy League grad with the best-selling book deals and the posh $1.65 million home with the wine cellar (but that's a different controversy). It seems to me, the penny-saving daughter of a middle-class white man, that you and your complaining, America-keeps-us-down wife are doing just fine. Since you're suddenly interested in talking about race, you're far better off than most white folks I've ever known.

Sen. Obama expended a vast amount of vocabulary--4,865 words--to make an elaborate case in defense of the poor misunderstood Rev. Jeremiah Wright. Obama's bottom line: White folks should make more of an effort to understand Wright's views.
It's going to take a lot more than eight American flags as stage props to make me swallow that stinker.
If Obama wanted to make his speech worthwhile, he should have said something like: "There is no excuse for what Rev. Wright said about September 11. There is no excuse for him to be profaning our nation. He should apologize."

That's 26 words and it covers everything that needs to be said. But Obama is more interested in churning out his baloney about more perfect onions. I'm glad I don't eat either.
Posted by Kathy Carroll at 7:24 PM