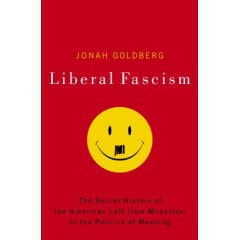 Those of you who thought we had a Second Amendment to keep government from fixing your soul are so 20th century. Evolve already.
~ Jonah Goldberg, June 6 2008
It's turning into a tie: who's the most hilarious columnist on the right? Is it Mark Steyn or Jonah Goldberg?
They both make me *LOL* with equal enthusiasm, so I just can't choose. They are smack even in my book. Speaking of books, Mark Steyn's America Alone is out in paperback now. I read it twice, it was so informatively entertaining. After reading Goldberg's NRO article on the "Messiah in Our Midst," I'm adding his Liberal Facism to my list of must-read books.
We live in serious times, but that doesn't mean we can't laugh.
Posted by Kathy Carroll at 7:28 PM