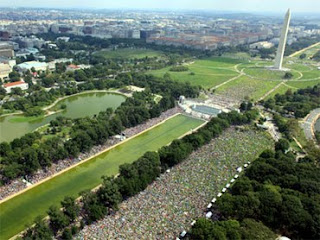 "Meaning of the crowd: An enormous upheaval in the emotions of average Americans is coursing through the country..."
~ Hugh Hewitt

"Seventy percent of Americans know they've been conned" is the telling title of Hugh Hewitt's Washington Examiner August 29 post. It gives a blunt and powerful recounting of the many reasons why 70% of Americans are fed up enough with the federal government to overrun the Washington D.C. mall at Saturday's rally.
Credit: AirPhotosLIVE.com
It's amusing to watch MSM struggling to downplay and belittle the significance of Glenn Beck's event. The sourest of media grapes won't neutralize voter wrath before November 2. It's time for the majority political party to get ready for some real change--that American citizens, not Beltway elites and their media cronies, can believe in.
Election Day Countdown:
64 days to the 2010 mid-term elections
798 days to the 2012 presidential election
Posted by Kathy Carroll at 9:35 AM

The Right to Do Wrong

Common sense, which is increasingly rare, tells me that nothing intrusive or controversial should be built anywhere near the site of Ground Zero, where the Twin Towers once stood. That means no church, no temple, no synagogue—and no mosque. Ground Zero is a sacred site, as worthy of national reverence as the Pearl Harbor or Gettysburg memorials.

In fact, Gettysburg had its own issue with inappropriate construction. A politically neutral observation tower opened in 1974, to provide aerial views of the battlefield. After a long legal fight in which area residents, historians, and many other Americans across the country protested this desecration, the tower was demolished in 2000.

Gettysburg is hallowed ground, a place where ten of thousands of American soldiers died in battle nearly 150 years ago. It is, quite rightly, federally protected land. A mere nine years ago, at the World Trade Center, a murderous enemy that remains openly dedicated to our total destruction slaughtered nearly three thousand innocent civilians. If they could speak, I would not be surprised if the combatants who died at Gettysburg would say that the land at Ground Zero is equally as holy in American history as their own blood-soaked battlefield.

Memo to Imam Rauf and all his endorsers, especially those in media and politics: Just because someone has the right to do something does not mean it is the right thing to do. Most Americans still understand that. It’s beyond pitiful that so many of our so-called “leaders” do not.
Posted by Kathy Carroll at 7:17 AM

Posted by Kathy Carroll at 4:09 PM

I didn't know that remains of 9/11 victims are still being recovered in the vicinity of the destroyed World Trade Center. This fact renders me so breathtakingly outraged over the disgusting mosque flap that I'll let Andy McCarthy do the talking for me, in this link.

McCarthy wrote another piece, "The Tolerant Pose," linked here. It's long, but concerned Americans won't notice. It's well worth your time to read every word. Be prepared to be thoroughly disturbed. But knowledge is power, and we need to stay educated about what we as a people are up against--from our government as well as our international enemies.

Ol-i-gar-chy\ 1: government by the few 2: a government in which a small group exercises control, esp. for corrupt and selfish purposes; also: a group exercising such control 3: an organization under oligarchic control
~ Merriam-Webster's Collegiate Dictionary, Eleventh Edition (2003)
This is the troubled crossroads the U.S.A. has reached. It's not a pretty sight. Let's take a quick look at the current distressing status:
According to the Rasmussen poll, the vast majority of Americans (86%) believe that the powers of the federal government should be restricted. The majority of those governing (54%) feel quite differently. That leaves us overruled, discounted, and working for the people we pay to work for us. They will tell us how it's going to go down, and we will learn to live with it.
This is the bad news. We, the citizens of the United States of America, are now the unwilling subjects of a small, arrogant, and disinterested ruling class. Currently, we as a people are held captive to the whims of these radical tyrants.
Now, a bit of good news. It is doubtful that the overbearing oligarchy that calls itself our government will be efficient or organized enough to actually abolish the right to vote before November 2, 2010. That's just 84 days away. One can only guess how many jet-setting vacations our royal elites will want to schedule with our disappearing tax dollars in that short span of time.
So, fellow citizens, evaluate your candidates and read your ballots with a keen eye, and prepare to vote with some discernment this coming Election Day. If we are not careful this time, it may be one of our last "free" elections.
Oh, one last item:
820 days to the 2012 election!
Posted by Kathy Carroll at 8:45 PM

He may have no faith, but the man certainly has talent. Christopher Hitchens' Vanity Fair piece, "Topic of Cancer," addresses the personal disaster of the disease with articulate description, wry humor, and his incomparable style. Famous as much for his strident atheism as his elegant writing, Hitchens deals with the prospect of a slow, painful death with an impressive practicality and matter-of-fact courage.

As Hitchens faces his own mortality and journeys through his sad illness, the old question springs to mind: Are there any atheists in foxholes? It's a hard question to ask, and an even harder one to answer.

In the end, probably he will be the only one who knows the answer. A foxhole is a lonely place.
Posted by Kathy Carroll at 12:39 PM