Holy tweet. This one will be hard to top. Hapless Buffalo Bills receiver Steve Johnson actually went on Twitter to berate God for letting him drop the ball.
Really? Yep, this is serious as a heart attack--or maybe a lightning strike. Take your pick.
Get a load of this histrionic tweet from Johnson to the Almighty:
I PRAISE YOU 24/7!!!!!! AND THIS HOW YOU DO ME!!!!! YOU EXPECT ME TO LEARN FROM THIS??? HOW???!!! ILL NEVER FORGET THIS!! EVER!!! THX THO...
I don't know if that celestial rant was such a wise move on Johnson's part. Is God really that concerned about the outcome of any particular football game? Somehow, what with war, famine, disease, death, frequent disasters, and ongoing creation, I think God has probably missed a few quarters. Furthermore, I doubt he TIVos any games.
Another thing: Do you think God reads his tweets? Even if he does, how seriously can you take a fool who's chewing out the Big Guy on Twitter? After all, Butterfingers Johnson's got life, liberty, the pursuit of happiness, and a big paycheck for playing a cool game. All these goodies come courtesy of the Lord--what more does he need? Well, perhaps a bit of double-sided tape for his game gloves. But I don't see how anyone could think that's on God.
As for praising God 24/7, that's quite a claim on Johnson's part. How much praying does he do while he's asleep? You know, it's those little fibs that catch up with all of us eventually. Remember what many of our moms told us: "God will get you for that." Or words to that effect. Maybe God "did" him to teach him a lesson; maybe Steve Johnson should "expect to learn" that life is not all about him. At least, not all the time.
So please, Johnson. If you'll "never forget this!! ever!!!", let the eternally-retained memory be the fact that YOU dropped the ball. And in the name of Facebook, get over yourself.
Posted by Kathy Carroll at 2:35 PM

"As we express our gratitude, we must never forget that the highest appreciation is not to utter words, but to live by them."

"If the only prayer you said in your whole life was, 'thank you,' that would suffice."

"Thanksgiving, after all, is a word of action."

"Thanksgiving Day comes, by statute, once a year; to the honest man it comes as frequently as the heart of gratitude will allow."

“Praise God even when you don’t understand what He is doing.”

Posted by Kathy Carroll at 2:21 PM 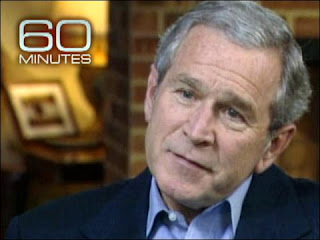 I've been watching a couple of the television interviews with former President George W. Bush as he promotes his book, Decision Points. Although they try mightily, the interviewers are unsuccessful in prompting the former president to say even a single negative word about his successor.
This magnaminity is quite remarkable, especially considering the fact that President Obama can barely go two paragraphs without flinging an over-the-shoulder mudball at his predecessor. Say what you will about George W. Bush--love him or hate him--but the man understands how a president should comport himself.
Bush's bearing and behavior during his book tour reminds me of a piece that appeared many years ago in Ann Landers' column. You can find it in Ann Landers Encyclopedia.

Class never runs scared. It is sure-footed and confident in the knowledge
that you can meet life head on and handle whatever comes along.
Class never makes excuses. It takes its lumps and learns from past
mistakes.
Class is considerate of others. It knows that good manners are
nothing more than a series of small sacrifices.
Class bespeaks an aristocracy that has nothing to do with ancestors or money. The most affluent blueblood can be totally without class while the descendant of a Welsh miner may ooze class from every pore.
Class never tries to build itself up by tearing others down. Class is already up and need not strive to look better by making others look worse.
Class can "walk with kings and keep its virtue and talk with crowds and keep the common touch." Everyone is comfortable with the person who has class because he is comfortable with himself.
If you have class you don't need much of anything else. If you don't have it, no matter what else you have, it doesn't make much difference.

Posted by Kathy Carroll at 7:23 AM

In honor of Veteran's Day this year, I decided to reflect upon the admirable qualities that all good troops share, no matter the country, the century, or the cause. There are remarkable similarities among all excellent military troops down through the ages, just a few of which are:
You'll find all of the above attributes depicted in the 1964 film, "Zulu," an adaptation of the Battle of Rorke's Drift in South Africa, 1879. If you enjoy movies that entertain while they inform and inspire and haven't yet seen that film, I recommend it. As they prepare for their crucial battle, the British soldiers literally sing in the face of death. It's a scene that will raise the tiny hairs on the back of your neck.

The men sing an old Welsh song, with special lyrics created for the film:


Veteran's Day, 2010 - Thanks to all the men and women of the U.S. armed forces throughout our country's history. Because of you, we are free.

Posted by Kathy Carroll at 9:20 AM

My Uncle Jack died yesterday. He had been increasingly ill for many years with Parkinson’s disease. At age 77, he was my mother’s youngest sibling.

Although terrible suffering and debilitation scarred his final years, I remember a very different man. As my youngest uncle (he was still in his teens when I was born), Jack was a fascinating figure during my childhood.

Jack had majored in science in college and chose chemistry as his career. Before he got married, he lived at home with my grandparents, as was the custom in the mid-20th century. Whenever I stayed at my grandparent’s home during school vacations, and while he was at work, I spent considerable time in Uncle Jack’s upstairs bedroom, exploring the captivating evidence of his hobbies and interests.

I marveled at ship models he had built inside huge glass bottles. I fiddled with the buttons and dials of his ham radio set (and got scolded for that, rightly so). Uncle Jack’s portable record player also was too great a temptation for a pre-teen. I combed through his collection of 45s and LPs and played as many as I could manage while my grandparents were outside in the yard.

Uncle Jack’s personal library was a source of endless entertainment. His bookshelves were crammed full of science, philosophy, theology, science fiction, and modern popular fiction books. I read the nuclear thriller Fail Safe straight through one rainy afternoon and gained my introduction to such masterful science fiction authors as Ray Bradbury, John Wyndham, and Richard Matheson. My first acquaintance with Thomas Aquinas was one of Uncle Jack’s books entitled God Exists. It contained the great saint’s five proofs of God from Summa Theologica. Heavy reading for a twelve-year-old, but read it I did, sitting at my uncle’s desk by the sun-filled gable window.

My uncle often took me with him on his errands around town, and I felt quite important sitting in the front passenger seat of his Buick. He would take me outside on starlit nights to point out the constellations, and he could do quite a scary Frankenstein monster impersonation. He always bought me books, sometimes for no reason, often as birthday gifts—dozens of Nancy Drew mysteries, ghost stories, histories for young readers, and my personal all-time favorite, The Phantom Tollbooth by Norton Juster. No child in my life has escaped receiving a copy of The Phantom Tollbooth. Just a few months ago, I had my tattered original hardcover rebound; it was a gift from Uncle Jack when I turned eleven. I still reread it occasionally, when life gets to be just too much.

Now might be such a time. As we advance along the crowded pathways of our years, we lose many of our heart’s treasures. I remind myself to be grateful that his suffering is over, and I pause to wonder--how much better would the world be if every child could experience such a loving example of family as my Uncle Jack?

Enjoy heaven, my dear uncle. I shall cherish your memory always.
Posted by Kathy Carroll at 12:52 PM

This is a link to the Real Clear Politics results page for the House races. If I'm addicted to any website, it's RCP.

Check out their homepage, linked here. It will keep you busy for hours. They post the best political writers--right, left, and center.
Posted by Kathy Carroll at 3:48 PM

"The Giants Win the Pennant" 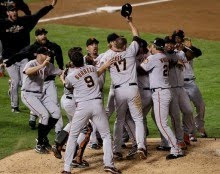