A Story of Life and Love

Every child comes with the message that God is not yet discouraged of mankind.
~ Author Unknown

A few years ago, at a college reunion, I spent time catching up with a “dorm buddy” I hadn’t seen since graduation. We met for lunch and shared all our family news from over the years. She has two adult sons, but she told me she had borne a third son who did not live.

Nancy told me that half-way through her third pregnancy, tests revealed that her baby had severe health issues and would not survive. A devout Catholic, Nancy had talked to her priest about the grim medical verdict. The priest asked her to consider one question: “What if they’re wrong?” After much thought and prayer, Nancy made the brave decision to carry her baby to term.

Her baby boy was stillborn. Nancy and her husband and their two older sons spent the afternoon together with him in a private hospital room. They baptized the baby and named him Brian. Nancy’s two older boys, at that time ages seven and five, each took turns holding their baby brother.

When Nancy’s sons were in their early 20s, they revealed a sweet and startling secret to her. During the tumultuous adolescent years, when parents and teen-aged kids often clash, her sons told Nancy that they would sometimes go to the cemetery to visit Brian’s gravesite, to talk to their little brother about all of their troubles with Mom and Dad. Both of Nancy’s sons said that they always felt better after doing this, and that solutions to family issues often seemed obvious after these visits.

By the time she finished telling me this sad and touching story, Nancy and I were both in tears. She told me that she thinks about her lost baby every day—in fact, she mentioned that the following Monday would have been Brian’s 21st birthday. But she knows that Brian’s brief moment on earth served a vital purpose for her family. Brian’s story is a beautiful testimony to the value and importance of every human life, no matter how seemingly pointless its earthly existence might have been.

I don’t know if I would have enough courage to make the difficult decision that Nancy made. But on this day that marks the 38th anniversary of Roe v. Wade, the story of Nancy and her baby Brian is certainly worth telling.
Posted by Kathy Carroll at 10:54 PM

Dear Pete,
It's hard to believe that today marks five years that you're gone. Sometimes it seems like yesterday, while at other times I feel like decades have passed. I know you're safely outside of time and all its constraints. But let me tell you--time is a force to be reckoned with.
You would be turning sixty years old in a few days. I'd be planning some kind of shindig, for sure. Maybe a party for your friends, maybe a trip to New Mexico to see that mysterious staircase built without nails that you used to talk about. You liked the legend that either a saint or an angel showed up, built it, and vanished. I may have to go and check it out on my own someday.
The kids are fine, as I'm sure you know. And I'm doing all right. I'm working, taking classes, seeing my friends, walking Riga every day. You'd be proud of all the work I've gotten done on the house--all by myself! I was quite the princess while you were around, never allowed within two rooms of a repair or installation. So I've had to figure out a lot by myself, sometimes the hard way. Even in heaven, the thought of me strolling into Home Depot must make you shudder.
You were right when you said I'd be okay. It's taken a long time, but I've reached a certain level of peace with my situation. I'll never like it, but it's livable. I think that the C. S. Lewis analogy comparing the loss of one's spouse to an amputation is the most accurate description. A physical part is missing; there's no escaping that fact. First there's shock, then grief, then adjustment, and finally, after much pain and effort, one arrives at a manageable life. But the constant awareness of the missing part never ends.
There's still plenty for me to be grateful for, with much joy to be shared among family and friends. Life is good. But when I wake up in the morning or lie down at night, I'm always aware of what's missing.
Posted by Kathy Carroll at 7:34 PM

If you think of this world as a place intended simply for our happiness, you find it quite intolerable: think of it as a place of training and correction and it’s not so bad.
- C.S. Lewis


It’s been a long, sad week in our country.

Five days ago, Americans of all ages, from a 9-year-old child to senior citizens, lay dying in a Tucson parking lot. Many more were wounded, some grievously so, and will face long and difficult recoveries. Yet within minutes, the media rants against “toxic rhetoric” accomplished nothing more than—well, toxic rhetoric.

Politicians pounced on the opportunity to lobby for gun control and the Fairness Doctrine and to advance their political agendas by loudly condemning “vitriol” in public discourse. “Vitriol” seemed to be the word of the week, with “rhetoric” running a close second. The fact that the killer is an apparent lunatic did not quell the irrelevant narrative about the culpability of cable news, talk radio, and former vice presidential candidates.

All the media and political flailing achieved nothing--except disgrace. When blatant ideological agendas are more urgent than grief over murdered innocents, we as a people are in a destructive place. The ugliness published and broadcast this past week was symptomatic of a deeper illness within our culture. It was a sign of the compulsion to demonize those who disagree and the selfish need to win at any cost—even if that means climbing over the dead bodies of children and grandparents.

I’m no fan of Barack Obama, and I didn’t see any coverage of the Tucson event last night. I’ve been so sickened by most of the media that I couldn’t bear to watch. But from what I’ve read today of his remarks, I think he made his best speech ever.

He remembered in detail all of the dead victims, about most of whom we have heard precious little in all the media scrambe for political points. He offered comfort to the families and encouraged us to aspire to higher ideals. He discouraged "vitriol." Probably the most true and important sentence in his address was:

“Bad things happen, and we must guard against simple explanations in the aftermath.”

In short, President Obama acted like a leader last night, with a leader’s focus on the truly important and an understanding that it is incumbent upon us to meet, defeat, and rise above the evil that surrounds us. If he starts acting like this all of the time, I could actually begin to respect him as president.

Time will tell if he truly believes the scripture he quoted:

There is a river whose streams make glad the city of God,
the holy place where the Most High dwells.
God is within her, she will not fall;
God will help her at break of day.
~ Psalm 46

Let's pray that it is so.

Posted by Kathy Carroll at 5:27 PM

It's long, but Dave Barry's review of 2010 will help put the past year's events into a humorous perspective--something much needed these days.
Posted by Kathy Carroll at 7:27 PM 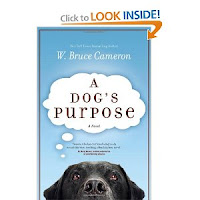 One of the many joys of the holiday season is some extra time off to catch up on a few of those favorite things. Visiting with family and friends is one wonderful benefit to Christmas time. Another is having a few hours to read whatever I want to read.
My daughter gave me a Kindle for Christmas. I hadn't even considered reading e-books before this, but I decided to do a test run. Once had I downloaded A Dog's Purpose by W. Bruce Cameron, I was e-hooked.
The novel follows the various incarnations of one special dog as he seeks, just as we do, to learn the meaning of life. Told by the dog in the first person, it is captivating from the first page.
This dog is not quite as astute as the precocious Enzo, hero of Garth Stein's The Art of Racing in the Rain, who usually seemed to understand exactly what was transpiring in his owner's life. In A Dog's Purpose, some of Toby/Bailey/Ellie/Buddy's perceptions of human motives, actions, events, and consequences are downright hilarious. As a dog owner, I laughed out loud more than once. The comical canine conclusions will explain those quizzical or evasive looks your own dog often gives you.
The dog's vivid narration pulls the reader forward. There are scenes that compel the obligatory tears necessary in any self-respecting dog story, but the book's message is noble and uplifting. To encourage fellow dog lovers to go ahead and risk heartache by reading this charming story, I'll break my customary spoiler rule and let you know that the main character is alive at the conclusion.
For any other details, you'll just have to travel along with this remarkable dog in search of his purpose. It's a journey well worth taking.
Posted by Kathy Carroll at 5:41 PM