A Bad Piece of Work

The more the news leaks out, the worse the story of the Benghazi cover-up gets. The shocking chain of events leading up to the death of four Americans on September 11, 2012, is uncoiling like a basket full of poisonous snakes.

There are several facts that can't be avoided. The first is that one of President Obama's stories is a lie--the attack can't be a pre-planned terrorist act and a spontaneous mob reaction to a video. The second is that no Commander in Chief worthy of the title hops on his plane and jaunts off to a Las Vegas fundraiser the same day that Americans are murdered by terrorists.

A third fact, most disturbing of all, is that the president had to have known what was happening, as it happened. As the bin Laden raid proved, this is the technological era of "live feed." Yet no help was authorized for our people in Benghazi, even as they begged for it during their prolonged battle. Why not? When directly asked that question by an interviewer, the president refused to answer--twice.

Tyrone Woods, one of two former Navy SEALs who died in the attack, was disobeying orders to "stand down" when he was murdered. He wasn't going to sit on his hands while the U.S. Ambassador he was assigned to protect was slaughtered. It cost him his life, but Woods was a man of courage and integrity, and he made the right decision. Too bad his "superiors" are so inferior to him.

This president is a bad piece of work. How fortunate for the nation that the presidential election is a mere nine days away. If by some chance Barack Obama is re-elected, he faces questions that will not go away and answers that will haunt a second term--not to mention a "legacy."
Posted by Kathy Carroll at 9:14 PM

Ten Reasons to Hope for Change

Last month, Hugh Hewitt devoted an entire show to “100 Reasons to Vote Against Obama/For Mitt Romney.” I downloaded the podcast and listened again, writing out the complete list.


Hugh said he came up with 100 reasons in less than an hour. The indictment includes such nasty items as the jam-down of Obamacare, the Solyndra financial debacle, and the drastic cuts to our military.


Choosing only ten reasons took some doing. I highlighted my “favorites” and found myself with 25 reasons. Combing through the 25 reasons, I whittled my personal list down to ten:


Ten Reasons Not to Vote for Obama


1.      The HHS attack on the Catholic Church and religious freedom


4.      The unelected bureaucratic IPAB of Obamacare deciding our health care


9.      Refusal to honor his Oath of Office and enforce marriage and immigration laws.


10.  The cover-up of the “Fast and Furious” Federal gun running scandal


All 100 reasons are valid. But there is one that resonates throughout all the other 99 reasons—“character counts.” Here’s hoping for change on November 6.
Posted by Kathy Carroll at 4:03 PM

So, Mr. President, which was it--an "act of terror" or "spontaneous response" to a YouTube video? 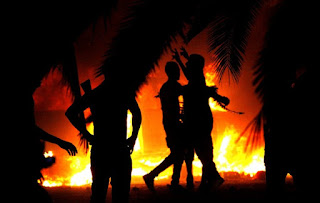 You can't have it both ways. The murders of our ambassador and three other Americans in the Benghazi attack on September 11, 2012, demand one answer. There is only one answer, and you have to choose one: terrorism or video.

Don't start rambling off-topic about how much "our diplomats" mean to you. Just answer the question. For once in your presidency, man up. It's not a hard question, and it has a one-word answer. Was the attack: a) terrorism, or b) video?

You claimed in the October 16 debate that misleading charges about Benghazi are "offensive" to you. Well, I find it offensive that you've done nothing but throw a load of baloney about this brutal and deliberate attack on America at the U.S. voters in a sorry attempt to drag yourself across the Election Day finish line.

But the timeline speaks for itself. If you won't answer the question, the facts will answer for you. Come November 6, it might be time for you to hit your own "reset" button. Not a moment too soon for the country.

Posted by Kathy Carroll at 9:32 AM

The only easy day was yesterday.
~ Navy SEALs motto

No Easy Day by Mark Owen (a pen name) is a first-person account told by one of the Navy SEALs who executed the Osama bin Laden mission on May 1, 2011. Although the book is close to 300 pages long, the story flies by.

Without disclosing sensitive information, Owen describes the unfolding of the mission in riveting detail. There are also many absorbing details about the daily life and inner workings of these elite warriors, their camaraderie, their professionalism, and their dedication.

No Easy Day is a glimpse into the operations of the special warfare teams that set themselves between America and her enemies. Reading this book reminded me to be grateful yet again that we have such men standing in the breach for us during such perilous times.

Posted by Kathy Carroll at 7:06 PM

Lara Logan gives a brutally honest evaluation of current U.S. foreign policy vis-a-vis the Taliban and the existential threat it represents to the U.S. It's close to 20 minutes of viewing, but worth every minute. I recommend making time to watch and listen.

I think Logan merits a very rare title in the twisted world of today's media: Journalist.
Posted by Kathy Carroll at 7:20 PM

But fair warning, gentle readers: wait until you've finished drinking your morning coffee before reading it, unless you enjoy nasal irrigations.

"How great the dignity of the soul, since each one has from his birth an angel commissioned to guard it." - Saint Jerome


On the Church calendar, October 2 is the Feast of Guardian Angels. Amidst the violence and hatred boiling over in the Middle East today, the angels assigned to guard our troops on the battlefield are working overtime.

Today would be a good day to pause and remember them--our troops and the angels, both.