Lessons from the Saints

I looked at the church calendar for today. One of the many saints whose memorial is today, January 27, is Angela Merici. I was surprised to read that she actually died on January 24, which is my birthday. Also, she is one of the "the incorruptibles," the term applied to those saints of the Catholic Church whose physical bodies remain intact after death.

(Aside: I wonder how atheists would explain the incorruptibles?)

Many years ago I read The Incorruptibles, the fascinating book by Joan Carroll Cruz (no relation). As it was a Christmas gift from one of my children, and one I had requested, I still have my copy. So I looked up Angela Merici's story to refresh my memory. There is a photo in the book of her body on display in a beautiful glass case in Casa S. Angela in Brescia, Italy.

St. Angela founded the Ursulines, the first teaching order of nuns in the Church. As usual, saints are busy people. She took her own advice to "do it now." I read somewhere that "saints are just sinners who keep on trying." As usual, again, there's a lesson there.

Posted by Kathy Carroll at 7:58 PM

"There are more things in heaven and earth, Horatio, than are dreamt of in your philosophy"
~ William Shakespeare, Hamlet, Act I


There's a lot more to dogs than we humans will ever understand. Read the story of Tommy, the loyal, bereaved German shepherd in Italy and see if you don't agree. 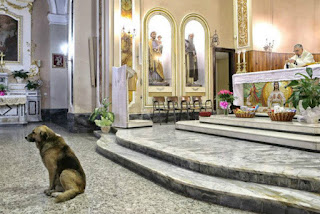 Posted by Kathy Carroll at 8:08 PM

“Until they became conscious they will never rebel, and until after they have rebelled they cannot become conscious.”
― George Orwell, 1984

"Do you hate Obama yet?" asked the front office receptionist. She has just looked at her paycheck and was running the numbers on her calculator.

Always careful to avoid political talk at work, I replied, "I never really liked him. Why do you ask?"

"Well, wait until you see your paycheck today," this young, liberal-leaning woman said. "You'll hate him." Before I left the lobby, she had finished her calculations and announced that she was now taking home less money than when she started working at the company two years ago.

This tableau is one that no doubt played out in countless workplaces throughout the country in the past week or so. As the cold, hard truth of government spending and ineptitude run amok is revealed to all in the concrete form of reduced take-home pay, workers are waking up to the fact that they've been had. And they're not too happy about it, to say the least.

My paycheck is indeed lighter, but not only because of the expired withholding tax. The company's medical premiums have skyrocketed; thank you, "Obamacare." In 2013 I'll pay four times as much as I did last year for medical insurance in each 2-week pay period and ten times as much for dental coverage.

I don't blame my company or the insurance company for the increase; I blame the government.

I've been following all of this tax fuss rather closely, and so the element of surprise (or maybe shock?) was eliminated in my case. But I'm sure that, for many 20-something-year-old front office receptionists who thought President Obama was a superhero, the hard lessons of our overweening, progressive, "Big Brother" government are just beginning to sink in.

Perhaps young workers waking up to reality will be a good thing for our country's future. I certainly hope so. If we're to have a future, the younger generation needs to understand what's going on and vote accordingly.

The confiscatory fun is only beginning for Big Brother. Just wait until next year, when PPACA ("Obamacare") becomes fully effective. As I said to another coworker who stopped by my office to bemoan her take-home pay shortfall, soon work will be like a hobby. Just something to occupy our time, keep us off the streets and out of trouble--and oh, yes, as President Obama once famously said, "spread the wealth around."

Posted by Kathy Carroll at 3:03 PM

Since I prefer not to start the New Year off on a depressing note, I'm linking to Mark Steyn's hilarious analysis of the "fiscal cliff" deal-that-wasn't. At least, it would be hilarious if his pithy observations weren't so sadly true.

Although its source remains a mystery, I suspect that the inevitable financial crisis approaching our nation will arrive swiftly. It will be like the words in the needlepoint frame in the climactic scene of The Shawshank Redemption: "His judgement cometh, and that right soon."

While there's still some time and a bit of money left in your wallet, treat yourself to a copy of Steyn's After America: Get Ready for Armageddon.
Posted by Kathy Carroll at 5:23 PM