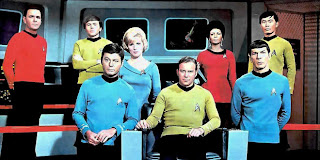 There's a new Star Trek movie coming out tomorrow. The occasion has me reflecting on the fact that I've been watching the Star Trek saga unfold since its very first television episode in 1966.

While some parts have been forgettable, most have been great fun. Every fan has their favorite spots in the series' seemingly endless timeline. I will always be especially fond of the original television show, even with its plastic monsters and bouncing cardboard boulders. To me, Captain James T. Kirk is the James Bond of space.

Many years later, my son was a devoted fan of the sequel series, appropriately titled The Next Generation. I thought Captain Luc Picard was wonderful, but a bit too calm and controlled. I prefer my starship captains dramatic and disheveled as they race up and down the decks to save The Enterprise.

The fresh crop of J.J. Abrams Star Trek movies is a terrific reboot. Chris Pine nails the melodrama and swagger of Kirk, and Zachary Quinto was born to play young Mr. Spock. The familiar supporting crew members are equally well cast. As is my policy, I'm planning to see Star Trek Into Darkness at the multiplex. After all, "these are the voyages of the starship Enterprise," and I've been traveling along for 47 years. That's a lot of star dates along the space time continuum. Happily, both Star Trek and I seem to have lived long and prospered.

Posted by Kathy Carroll at 9:10 PM