“The bargain that any president strikes with is, you give me this office and in turn my, fears, doubts, insecurities, foibles, need for sleep, family life, vacations, leisure is gone. I am giving myself to you."
~ Candidate Barack Obama, 2008 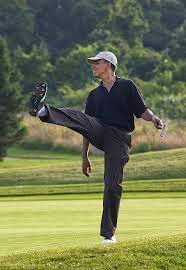 Leaving the laughable "promise" quoted above aside, why can no news outlet mention President Obama's vacation time without dragging in the recreational record of former president George W. Bush?

Because they are making excuses and covering up for the current, very lavish Vacationer-in-Chief.

Nobody ever points out the fact that the Obama family vacations involve much greater expense of taxpayer funds than Bush hiatuses did. President Bush spent the overwhelming amount of his "time off" at the family residences--either the Texas ranch or the Maine home. Outside of the plane ride, there's not much extravagance involved in visiting your home. Contrast Bush's "stay-cations" with President Obama's repeated trips to Hawaii and Martha's Vineyard, not to mention his wife's forays to Spain, Aspen, and other exotic locales. Yet Bush's "days away from Washington" are pounded as evidence that President Obama, by comparison, is absolutely spartan in his vacation habits.

It's also worth mentioning that President Bush refrained from golf games beginning in 2003, because he felt it was inappropriate during the Iraq War. (He even has the good grace to defend President Obama's golf outings.) But considering the fact that President Obama was back on the green within an hour after giving his brief prepared statement of outrage over the beheading by ISIS of American journalist James Foley, I wonder what terrorist atrocity would qualify as worthy of eschewing a round of golf?

When the next inevitable "Big Hit" comes to the USA from Islamic terrorists, what will the liberal media's excuses be for our Golfer-in-Chief?