"Only a virtuous people are capable of freedom. As nations become corrupt and vicious, they have more need of masters." 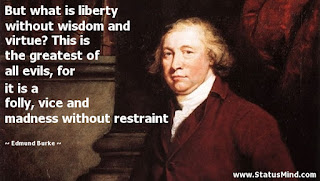 I watched Justice Antonin Scalia's funeral today, and it was quite poignant to watch one of his sons, a Catholic priest, celebrate the Mass. Watching the justice's small-army-sized family and listening to Father Paul Scalia speak about the strong faith his father held, it reminded me of how important the respect of religion and its principles was to the Founders of our nation.

The Washington, Jefferson & Madison Institute website has an excellent posting from April 2011 on the significance of morality and virtue to a free republic. Virtually all of our Founding Fathers had something to say about the necessity of virtue. George Washington said that "Human rights can only be assured among a virtuous people." Madison stated that "liberty or happiness without any virtue in the people" was unattainable. Jefferson asserted that people educated in "habits of virtue" were necessary to maintain our good government. John Adams said "public virtue cannot exist in a Nation without private Virtue," and Samuel Adams wrote that "the truest friend of the liberty of his country...tries to promote its virtue."

I recommend reading all of the full and direct quotations, linked here, especially in light of the power struggles and ideological battles to come over Justice Scalia's replacement. At this crucial time in our history, its vitally important that Americans become reacquainted with the historical cornerstones of our nation's founding, not the political fads of the moment.

We need a new Supreme Court justice of high virtue. Great care and ample time should be taken to ensure this outcome in order to preserve and strengthen our eroding liberties. Based on the writings they left behind, I'm sure the Founders would agree.

Posted by Kathy Carroll at 2:24 PM