"'Gregor Sampsa awoke one morning to discover that he had been transformed into a giant cockroach.'"
"Nah, it's too good..." 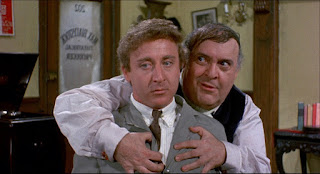 Almost anyone who likes to laugh enjoyed at least some of comedic actor Gene Wilder's work. From The Producers, to Blazing Saddles, to Young Frankenstein and far beyond, Wilder's sometimes smart, sometimes silly humor was hard to resist.

The Producers is my favorite Wilder movie, but many of his films have become comedy classics over the decades. Gene Wilder died today at age 83; he had been suffering from Alzheimer's for several years. It's always sad when talented stars leave us, even if it is their time. Fortunately, we get to keep watching his movies.

Posted by Kathy Carroll at 8:42 PM