Keep A Sense of Humor

The other day, while listening to the car radio on the drive to work, I heard this description of President Trump's relationship with the media:

"Donald Trump is the guy with the laser pointer. The media is the cat chasing the red dot."

That one sentence sums up the situation with a dramatic visual, and it made me laugh. I wish more people would just lighten up a bit. The U.S. Constitution is solid and strong; we really don't need to worry about a new Hitler. If we survived eight years of the Community Organizer-in-Chief, we'll survive President Donald Trump, also.
Posted by Kathy Carroll at 5:57 PM

Marching to a Different Tune 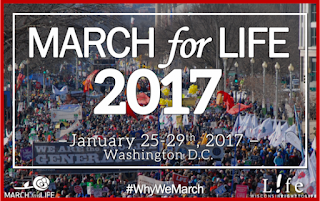 I wonder how much coverage of the annual pro-life March for Life will be featured in print and on the air this week? I'm certain any reporting on March for Life 2017 will be far more muted and perfunctory than the lavish coverage today's protests received.

It's fine to protest peacefully--that's the American way. It's the media's job to report the news, and that's been done with great enthusiasm today. It would be only fair and equitable if a differing point of view might receive the same respect and attention from the various media outlets. As the poet said, "Hope springs eternal..."
Posted by Kathy Carroll at 7:58 PM

A Lesson in Brotherhood

It doesn’t matter if it’s in Iran or in Iowa—a building collapse that kills firefighters elicits the same profound response from the universal brotherhood that unites all firefighters.

Firefighters live with the knowledge that death in the line of duty is a shadow over every work shift. They go on about their vitally important work with a tacit acceptance of the ever-present danger. When that ghostly danger becomes hard reality, as it did today in Tehran, we are all reminded of how much gratitude that we—the collective humanity of Earth—owe to these brave souls.


If everyone lived as firefighters do—dedicated and devoted to their calling, caring and compassionate of others, in a fraternal union with all of their colleagues—there is no doubt that the world would be a much better place. Thank you to all of them—worldwide.
Posted by Kathy Carroll at 7:22 PM

Deep into this month of auld lang syne, most of us are past wishing each other a Happy New Year and have plunged headlong into living it.

For me, January has always been an introspective month. Aside from the futuristic aura of a new year, this month marks both my birthday and my daughter's, exactly one week apart. It was also my husband's birthday month, as well as the month that he passed away, eleven years ago. So January always catches my attention on many levels.

In recent days, several unfolding events have underscored the forward march of time so tied to the month of January:
We're going to have a new president in a few days. It will be a very different presidency from the past eight years. If we're fortunate, it will be better. Many critics refuse to countenance any optimism about the 45th president, but I think we should all take a breath and see how it goes, just as we do every January. Start fresh, look forward, and hope for the best.
Posted by Kathy Carroll at 10:06 PM

I think it's clear that Russia is a guilty player when it comes to Internet hacking. I think that's been true for many years.

Suddenly, because Hillary Clinton lost the presidency, Russian hacking has become a very big deal. It's quite the international incident that Democratic party emails were hacked, what with Russian diplomats being booted out of the country by President Obama. (And, it must be noted, to get President Obama to actually act on anything other than showing up for his tee time is a very big deal, indeed.)

Russia has been messing with us for at least fifty years, and nobody has showed much interest in holding them accountable. But this election, why, Hillary lost! This was the last straw. And what effect did Russian hacking really have on the results of the election? None that anyone can prove, as even the White House has admitted. Electoral votes in decisive states simply followed Trump in droves.

Regardless of Russia's meddling--which is unquestionably bad and unacceptable--some facts of the election season remain unassailably true.
Hacking may have its consequences, but so do elections. Blame Russia if you must, but have some clarity about what just happened in our country. In this election, everyday American voters who are sick of empty promises did not allow themselves to be manipulated by spin or excuses. It's a fact that both the dinosaur media and the Democratic party are having a very difficult time accepting.
Posted by Kathy Carroll at 7:18 PM