A thousand may fall at your side, ten thousand at your right hand, but it will not come near you. 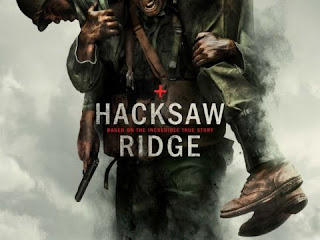 I watched the movie Hacksaw Ridge last night. Based on the life of Desmond Doss, it's a remarkable story from many perspectives, most notably the determination of one man to stand by his principles at any cost, his inspired courage under horrifying circumstances, and the power of faith in action against terrible odds. In the midst of such towering drama, there is the underpinning of a sweet and timeless love story.

Mel Gibson directs, and as might be expected from his previous war films, the battle scenes are brutal to watch. But Hacksaw Ridge is not simply Braveheart with rifles and grenades. Doss was the first conscientious objector to win the Medal of Honor; he refused to touch a rifle. This fact alone is a departure for Gibson, who has built a career playing and directing violent action heroes. Yet there is a gritty realism in the battle scenes, a frightening sense of being on the battlefield, that Gibson's previous work does not approximate. This is a riveting historical story, and the directing does not get in the way of telling it.

Hacksaw Ridge is nominated for several Academy Awards, and tonight we'll find out if it won any of them. But awards are far beside the point. What Desmond Doss accomplished in the battle for Okinawa is nothing if not miraculous. What besides divine providence could have protected a weaponless man who stayed behind alone on a dangerous battlefield that was overrun by the enemy and risked his life to rescue more than seventy wounded soldiers? It's a rhetorical question that summarizes an outstanding movie.

Posted by Kathy Carroll at 6:02 PM