I am often asked “Why do Southerners still care about the Civil War?”… Because it is unique in the American experience. Defeat was total, surrender unconditional and the land still occupied. ~ Tim Heaton 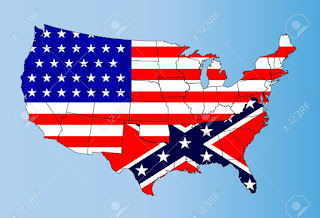 When it comes to the current controversy surrounding the Confederate battle flag, I find that I am able to understand both points of view.

By today's intolerant cultural standards, that probably makes me a racist. Nevertheless, I can see both sides of the argument.

First of all, this flag is part of our national history. I realize that the Nazi flag was part of Germany's history, also, but I'm talking about the United States at the moment. Our country fought a long and bloody internal war over two opposing ways of life. We weren't pursuing global conquest; we were tearing each other's throats out, brother against brother unto agonizing death. In fact, it was the bloodiest war in our history. The rift was entirely within our own nation--a violent, devastating family fight, so to speak. The northern states fought under the Stars and Stripes; the southern states fought under the Stars and Bars. Every soldier was an American. I can understand why those Americans whose ancestors died and/or suffered because of the Civil War (also called the War Between the States, or--popular with Southern citizens--the War of Northern Aggression) would want to commemorate that sacrifice by flying the Confederate battle flag.

And there is always the question of First Amendment rights. If "freedom of speech" includes the right to burn an American flag, why is simply displaying a Confederate flag an illegal act?

On the other hand, the economic system of the South incorporated an intrinsically evil institution--slavery--and displaying the Confederate flag affirms approval and acceptance of that evil and the centuries of human misery than resulted from it. In addition, the Confederate flag symbolizes a fractured nation, a country destructively divided against itself. Hoisting such a divisive symbol isn't a good idea, particularly in our culturally hysterical and politically hostile atmosphere.

So where do I stand? I say no, please don't fly that flag. We're all Americans, a century and a half past the end of that bitter conflict between the states. Let's put the "United" back in front of "States" and keep all of us together under one flag.

But if it means that much to someone to fly the Stars and Bars--well, theoretically, this still is a free country. Go ahead and fly your antique flag. I'll ignore you; but I wouldn't try to stop you.

Posted by Kathy Carroll at 2:49 PM