A Day For The Angels 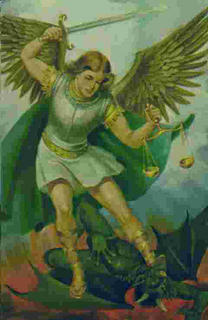 Today, September 29, is the Feast of the Archangels Michael, Gabriel, and Raphael.

I am a bit of a nut on angels. Ever since I was a child, these ethereal, supernatural beings have fascinated me. In 1980, I began collecting angel memorabilia, and people close to me know how to shop. I could certainly open an “Angel's Emporium” with my huge inventory of angel statues, knick-knacks, paintings, photos, books, craft and needlework creations.

Christmas time has a solid angel theme in our house. In fact, even though we decorate a 9-foot tree each year, the angel ornaments must be rotated on a semi-annual basis due to limited space. Family and friends can easily identify our holiday greeting card. One of my brothers told me “I just look for the angel” to know that my Christmas card has arrived.

And, of course, I’m a Soldiers’ Angel. That was a natural for me. Aside from sincerely believing in the organization’s good work of supporting our troops, I enjoy the whole idea of “joining the Angels.”

Angels populate the Bible with amazing frequency and at very key moments, starting with Genesis and ending with Revelation. Among their many significant activities, the angels frog-march our first parents out of the Garden of Eden after their fall from grace, stay Abraham’s hand before the sacrifice of Isaac, announce to Mary that she has been chosen as the Mother of God, issue both reassurances and warnings to St. Joseph regarding care of the Holy Family, herald the Savior’s birth, minister to Our Lord after his temptation, appear to the disciples after the Resurrection, free St. Peter from prison, and participate in the events of the Apocalypse.

The word "angel" comes from the Greek word meaning "messenger," and the title of archangel is conferred upon angels who deliver messages of supreme importance to humanity. Gabriel's message to the Mary, that she is chosen to be the mother of the Messiah, is one outstanding example.

The archangels have special powers and duties. Gabriel is the patron saint of communications workers, including broadcasters. Raphael has healing powers, specifically for blindness, and is the patron of sick people. Michael, patron saint of police officers and soldiers, defends us against the powers of evil. He is considered to be the guardian angel of Israel, and he appears in the Koran, as well as both the Old and New Testaments.

Angels are very busy creatures on God's behalf. They are intimately involved and concerned with mankind, so much so that many believers have faith that each of us is assigned our own personal guardian angel throughout our earthly lives.

Whether or not we believe in angels is beside the point. Fortunately for humanity, the angels believe in us.

For he shall give his angels charge over thee, to keep thee in all thy ways.
~Psalms 91:11
Posted by Kathy Carroll at 8:39 PM