The state of New Jersey has put its figurative foot down over the dubious Dubai port deal. Good for them. Let's hope they've started a trend.

It's hard to believe that the executive branch actually needs a diagram to figure out why there's such a flap about this. All I can think of as a reason to justify the deal is that, possibly, there are enough U.S. intelligence operatives in place within the UAE company to make the Bush administration comfortable.

It's nice that the president feels good about it, but what of the dismay of U.S. citizens? Like the hapless Lucy in the old TV show, he's got some 'splainin' to do.
Posted by Kathy Carroll at 9:26 AM

Sure, put the UAE company in charge of United States ports. Not enough ridiculous and insane things have happened this month.

There's no way the American people, that he's always claiming to be so concerned about, are going to stand for this nonsense by President Bush. He needs to back down, and fast.

The UAE in charge of our ports. Good grief. While you're at it, Mr. President, why not give UBL a cabinet post?
Posted by Kathy Carroll at 4:05 PM

More of the Same, Only Worse

In view of recent life events, I haven't paid much attention to world affairs. As I'm starting to focus back in on the headlines, I can see that we have no lack of pathetic news scenarios with which to grapple.

There were the cartoons, of course. The satirical drawings that some in Islam claim are as reprehensible as the events of September 11. Of course, can't anybody see that? Drawings in a newspaper inflict exactly the same damage as jumbo jets deliberately crashing into buildings full of innocent civilians. Anyone who can make that assinine assertion with a straight face shouldn't be walking the streets.

Then, there was the political grandstanding at Mrs. King's funeral. Wasn't that just lovely? Such a tribute to her life it was, those snide jabs about Hurricane Katrina and WMDs. Leave it to Jimmy Carter to find such an inappropriate venue in which to hurl his verbal dung balls at the current U.S. president. Just about the classless behavior I have come to expect from Carter. All I can say is, "nuts" to that.

Now, we've got the unceasing flap about Vice President Cheney and the accidental shooting. Evidently there was a 20-hour delay in letting the press know about it. Okay, here's my question on that subject: If Cheney's office had notified the press immediately, how much do you want to bet the press would be yelling "damage control!" and criticizing the Vice President for not making medical attention for the injured man the first priority? Whatever you'd like to bet, I'd take it.

Let's not forget, there's also the deadly riots in Pakistan and the former VP Al Gore's anti-American comments in Saudi Arabia. Those last two stories seem more like real news to me than a shooting accident, because they impact all of the U.S. That's probably why we can't find much MSM coverage of them. Too much work for the press, too little damage to the president's administration.

I've been away from the news for almost a month, but it appears that nothing much has changed. Unless you count the fact that it's gotten worse.
Posted by Kathy Carroll at 2:59 PM 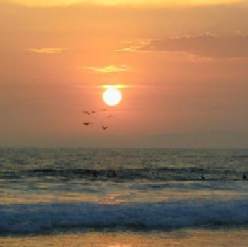 It started out as a difficult day and got much worse before it got better.

None of our plans were falling into place. The kids, Kristine and Matt, Pete's brother Arnie, and I were delayed half an hour while waiting to collect Pete's urn from the church office, where it had rested overnight after his memorial Mass on Saturday. Then, we discovered that our boat ride was postponed for at least two hours. We waited at the dock. After noontime, we were directed to a different dock location. When we arrived there, we saw that the bathtub-sized motor boat that had been scheduled to take us out to sea to lay Pete to rest was not running.

It was a beautiful, clear, sunny Sunday. The ocean flashed and shimmered like liquid sapphires. Yet we had spent hours wandering in forlorn circles and had gotten nowhere nearer to fulfilling Pete's last wish. It was a discouraging moment for all of us.

The tiny boat's skipper spoke to someone who worked on the dock, who in turn made a phone call. A few minutes later, we were given the slightly encouraging news that if we could wait another twenty minutes, a much nicer boat could take us out for our mission.

By now, we all were heavily invested in this adventure. We agreed to wait it out and were directed across the street and down the block, to yet another dock location. By now it was mid-afternoon, but we were willing to be patient and see what the fates would deliver.

Then we saw the boat sailing majestically down the channel towards us. It was a 73-foot yacht, an absolutely gorgeous boat.

The skipper's name, interestingly enough, was Peter. The crew were all friendly and sympathetic. They helped us onboard, served us refreshments, laughed and talked easily with us. When we were far enough out to sea to lay Pete to rest, the four of us went up to the bow along with the skipper. Peter said a beautiful, spontaneous prayer about the power and wonder of the Universe. Matt tossed his Dad's urn over the side, and each of us in turn pulled off our Hawaiian lei and flung it onto the rolling sea.

The golden afternoon continued as we sailed back to the dock, and we were all very grateful for the hospitality of these kind-hearted strangers. As magical as the day had become, it was hard for me to face coming back to shore. I had left the tangible remains of my life’s love behind me, under the waves, down in the deep. A whisper inside tells me that Pete sent that beautiful boat our way, to deliver a cheerful surprise on what could have been a much more depressing day for his family. It just seems like something that Pete would arrange.

Love never leaves. Wait for me, Pete. Out there, beyond the sea, I believe I’ll come find you again one day.
Posted by Kathy Carroll at 9:30 PM

If you're 62 years old and still getting censored for inappropriate content in your song lyrics, you're probably beyond hope for knowing how to behave. Not that such a revelation would trouble the likes of the Rolling Stones' Mick Jagger.

Following Jagger's Superbowl XL half-time wiggle romp, my mother casually remarked, "He won't be able to get out of bed until Wednesday." I had to laugh at the image of Mick Jagger limping towards his bottle of Tylenol Arthritis.

The dirty old boy is one entertaining senior citizen.
Posted by Kathy Carroll at 10:08 PM

We all know that, no matter what happens, life goes on. Sometimes it doesn't seem right that it does continue after a terrible loss, but we know that we must soldier on.

It is now "last month" that my husband Pete died, on January 20. My daughter returned to work today, my son went back to his home. I continue to wrestle with the depressing details of death--the bank, the insurances, the memorial service, the continuing phone calls and notifications. I realize that this is a stage of activity that must occur, and that it serves the useful purpose of distracting me from the enormity of my loss. When life quiets down again, I know that the going will get really tough for me.

For now, Pete is still in the present tense. All the many chores, errands, and actions that surround his passing involve him. It's as though the world is buzzing around him as the epicenter. When all the red tape has been unraveled and put to rest along with Pete, the world will have moved on and I will be left to face my future without him.

Pete was never much for worrying. His motto always was that "things work out." I suppose he was right; things do, in time, work out. Life will go on. But it will take me the rest of my life to work out Pete being gone.
Posted by Kathy Carroll at 10:26 AM