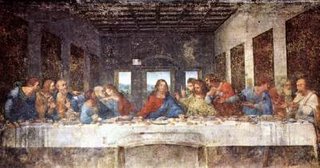 Andrew Sullivan has some interesting thoughts on the media’s double standard towards their portrayals of religion. It is a code strictly honored by today's film makers, and it all boils down to a very simple formula that is applied rigorously in modern movies:

The Da Vinci Code, which will premiere at theatres on May 19, is already being rammed down the prospective viewer’s throat. (Pardon my violent metaphor, but after all, I am a Catholic.) Ubiquitous television ads for the movie show shadowy snippets of the Catholic villain who methodically whips himself for being such a bad boy, as Tom Hanks’ furrowed brow and fearful baritone foreshadow the dangerous discovery of the terrible, dark, ancient secret so fiercely guarded by the wicked Church hierarchy.

Oh, the heart-stopping questions this gripping drama has brought before us! Has one of the oldest, largest, most revered religions been built upon a lie? Can the Church survive such a revelation? Has evil triumphed in perpetuating this charade? Will the world be rocked to its foundations by “the truth”?

Yawn. Excuse me, but I have some questions of my own:

Has anyone in Hollywood bothered to identify the number of historical inaccuracies in this novel? Will anyone ever have the guts to make a movie about the evil and brutality of Al Qaeda? Does Hollywood even recognize the difference between good and evil? How about the difference between truth and fiction? And the most urgent question of all regarding the movie “The Da Vinci Code”—

Can I have some more popcorn?
Posted by Kathy Carroll at 4:13 PM