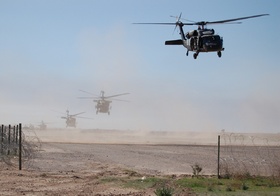 Read today’s accounts of Operation Swarmer, our military’s offensive against the relentless killers of Al Qaeda. Read about Al Qaeda’s planned infiltration and cold-blooded plans to do harm against civilians in the United States and British embassies in Iraq.

When you are finished reading those two stories, read of Sen. Russ Feingold’s plan to censure President Bush for wiretapping phone conversations between Al Qaeda and its suspected operatives in America.

All finished? Okay, for anyone leaning left on the issue of censure, I have one question. In view of the fact that our nation is at war against Al Qaeda and their ilk, and with proof of the enemy’s continuing and confirmed plans to do us and our allies harm, why should we not listen to their phone calls coming into this country?

If I'm not chatting with Al Qaeda on my phone, I have nothing to be concerned about. Neither does any other American citizen. So why are certain politicians so concerned with U.S. citizen's rights being applied to foreign terrorists who want us all dead?

It's the day we stop listening to these conversations that has me worried. Intercepting possible terrorist phone calls makes perfect, logical sense to me. Of course, in an election year, any logical sense, perfect or otherwise, will be in short supply on the minority side of the aisle. Even if it means another 9/11.

I guess that leads me to another question: At what price power?
Posted by Kathy Carroll at 9:07 AM