A Saint For the Ages 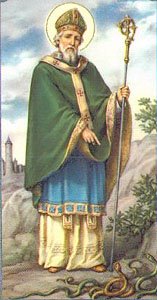 I arise today
Through a mighty strength, the invocation of the Trinity,
Through belief in the threeness,
Through confession of the oneness,
Of the Creator of Creation.
~ from St. Patrick's Breastplate - a prayer

In today's secular celebrations of beer and corned beef, the rich history of St. Patrick's Day is often overlooked. The fifth century holy man named Patrick began his ministry as a slave and ended as a bishop. St. Patrick converted Ireland's pagan druids to Christianity by using a shamrock to demonstrate the mystery of the Holy Trinity, explaining the three leaves on one stem as representing the Father, Son, and Holy Spirit present in One God.

Patrick's legacy of learning helped to preserve Western civilization throughout the Dark Ages, when monks in monasteries his ministry had established served to keep literacy alive and history preserved for the modern world.
Posted by Kathy Carroll at 7:41 AM