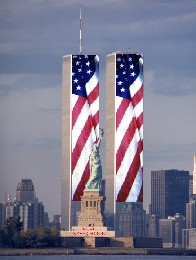 The World Trade Center Traveling Memorial was at the San Diego Police Officers Association building this weekend. I went to see it today.

If it comes to your area, the WTCTM is a must-see.

Created by two retired Port Authority police lieutenants, Chet Weekes and Gene Smith, it is a powerful and moving tribute to all who died that terrible day. The 37 Port Authority police heroes who sacrificed their lives are pictured individually on large posterboards, with their personal stories written next to their photos.

There is live video footage of the chaos surrounding the towers burning and the impact of the second plane. The airline flights involved in the attacks that day, as well as Flight 93, the Pentagon attack, the fallen New York police and firefighters, the 37 Port Authority officers and the murdered civilians, are all commemorated with honor, respect, and poignancy. No one is overlooked, including our troops fighting to protect us.

The most gripping items in the exhibit were bits and pieces of wreckage pulled from the Twin Towers disaster site. Crumpled police car doors, burned and soiled rescue worker caps, broken flashlights, smashed computer boards and charred road signs--and perhaps most haunting of all, jagged pieces of fuselage from the two planes that exploded into the towers.

It is so vitally important to our national memory that this story be retold, over and over again. We must not forget that the enemy who perpetrated these monstrous attacks upon our country would delight in seeing such destruction and carnage in every American city. In our everyday lives of comfort and plenty, that fact is easy to forget.

These two dedicated men, Lts. Weekes and Smith, who attended 30 funerals of their friends and colleagues within one month after 9/11, are doing a great service to our country in keeping the memory of 9/11 alive. I am grateful that they are making the effort and taking the time to remind us of that which we should never forget.

Posted by Kathy Carroll at 2:26 PM