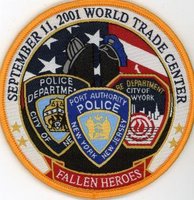 Never forget the three battlefields of September 11, 2001, where thousands of our fellow citizens were slaughtered in a brutal act of war against the United States and its people.

I'll be in New York on 9/11. I'll also be taking a plane home to California on that day. It seems a fitting action to commemorate our murdered countrymen on the fifth anniversary of the merciless attacks that have come to be known simply as 9/11.

Posted by Kathy Carroll at 9:17 PM