"We're in this together" 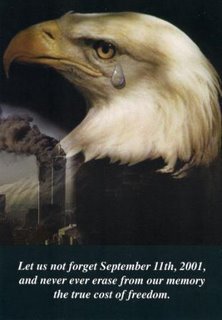 I flew home to San Diego from New York today, nonstop on American Airlines. It was a light passenger load, with perhaps one-third of the seats filled. The disaster of five years ago no doubt lays heavily on many travelers' minds. It certainly crossed my own mind, after seeing the riot of 9/11 coverage in New York newspapers all weekend and this morning. I prayed more than usual while awaiting takeoff.

It was a beautiful late summer day in New York today, a sparkling image of that tragic morning five years past. On the plane, I spotted a young Marine loading his gear into the overhead, and thanked him for his service--a rewarding habit I have acquired from Hugh Hewitt's oft-repeated advice. The young servicemen I greet and thank are always taken aback at first, and then warmly appreciative of the recognition. More Americans should try this simple gesture that is so important, so appreciated, and so gratifying to extend.

The flight was quiet and uneventful, and it was a rare treat to be able to stretch out across three seats to read my book, as though sitting on my living room sofa. As we approached San Diego, the captain made a brief and poignant statement over the speakers. To paraphrase, he thanked us for traveling with them on this date, when so many of our countrymen died in "such a horrific way." He stated that American Airlines had felt the loss "up close and personal." The captain then asked all passengers, "As you go about your business today in San Diego, please take a moment to pass a thought, raise a toast, or offer a prayer....for those who died."

He concluded with this simple directive, which was startling in its brilliant truth:

"Remember that we are all in this together."

Through the chaos, smoke and ash of September 11, 2001, that one fact seemed so very clear to all Americans. Remember "United We Stand"? We knew we were all in it together then. It's time to remind ourselves: no matter how we vote, or how much we wish things were different now, five years later we are still in it together.

Probably for a very long haul.
Posted by Kathy Carroll at 5:53 PM