Posted by Kathy Carroll at 7:36 PM 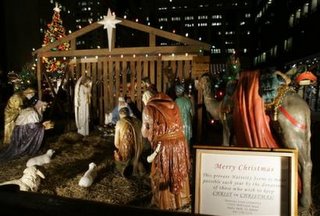 At last, one-stop news shopping (HT: Hugh). All of my favorites, including Real Clear Politics, are right there on the same page.
As I browsed among the seemingly endless links, a giddy news junkie not knowing which headline to gulp down first, TheNewsRightNow seemed almost too good to be true. Could I be dreaming? Then, I read this story on banning Christmas scenes from a Christmas festival. Its sheer absurdity reassured me that I'm fully awake.
I wonder, when will the right occasion arrive for "officials" to worry about offending Christians? Evidently not at Christmas time. That's the news right now--and yesterday, and tomorrow, ad infinitum, ad nauseum. Bah, humbug!
Well, I'm not an "official," and I'm not "worried about offending non-Christians." Especially at Christmas time. So MERRY CHRISTMAS to all my readers. Christian or not, I hope you enjoy the coming season.
Posted by Kathy Carroll at 6:56 PM

The marathon month of holidays has arrived, my first without Pete. I’m hoping I can maneuver a positive path through the season.

Thanksgiving is tomorrow. Both of our children will be at my house for dinner, along with their sweethearts. My mother is also here, visiting from New York, holding up the dessert standard in Pete’s absence. The dinner menu remains unchanged after over 25 years. Too much else is different, so the comfort of Thanksgiving tradition holds a special appeal for me this year.

When I stop to count my blessings, I am reminded of the gifts that fill my life. Thoughts of my daughter and son launch an immediate smile. In the midst of their own sorrow, they both have been my joy, comfort, and right arm each day of this difficult year. So, too, have been their partners—I like to say I have four “kids.” My many supportive friends and family members, my home and job, and my good health rapidly complete a full and happy list of the joys and treasures left to me.

There is always much to be thankful for in life, perhaps especially after such an overwhelming loss as the death of one’s spouse. Nothing brings what is precious into sharper focus that the death of a beloved one. I will be reminded of that as I glance at his empty place and recall the dozens of happy holiday dinners we were fortunate enough to share.

Remember to tally up your blessings tomorrow. You may find you have more than you appreciated; and, perhaps, some that will be gone this day next year.
Posted by Kathy Carroll at 2:09 PM

It’s tough to come back to routine and reality after a two-week cruise to Hawaii. I’m in the process of returning to earth, and it’s slow going. Having been there once before, I know that no one ever really comes back completely from a Hawaiian vacation.

Add to that the fact that the only news I could get aboard the cruise ship was CNN, and you can understand why I’ve had to take a few days after returning to the mainland to recharge my neurons. Good grief, how can people watch that pap all day long? Nancy Pelosi talks about “draining the swamp” of the Republican Congress, but I needed a few days to drain my brain of the toxins from the nonsensical garbage that was pumped in for fifteen days. Presenting a different perspective is one thing; flagrant attempted brainwashing is another thing altogether.

Where to begin describing the lopsided leftist coverage? Working backwards, let’s begin with the commentary on Pope Benedict’s decision to reinforce the Catholic Church’s stand on celibacy. The snide grins and condescending headshakes were beyond editorial, reaching into the nether realm of nasty. I don’t see any CNN reporters criticizing Islam because it won’t budge an inch on its central tenets. Why is the Catholic Church considered so hopelessly backwards when it reaffirms its own principles?

The O.J. debacle got huge and constant airplay. I don’t want to waste more than one sentence on that abortion of a “news” story.

And poor Ed Bradley! You’d think he was the first journalist ever to die. CNN coverage was non-stop and round the clock. Over several days following that sad event, each time I flipped on the set, there was a screen-sized picture of Bradley, with the caption “Ed Bradley’s Shocking Death.” Now, I’m sorry, but if you’re 65 years old and are suffering from a lethal disease, death is hardly a “shocking” outcome. CNN’s sensationalizing of Bradley’s death continued past the point of maudlin.

Of course, the elections made them all giddy. CNN smiles universally were ear-to-ear on Election Day and the days after. It remains to be seen if they can keep them there based on the Congressional majority’s performance in ’07.

As to my own reaction to the elections, I was disappointed, certainly. But, I am hopeful that this outcome will jar the Republicans into an action plan. The Republicans wasted their years of majority by accomplishing too little and abusing too much. Now the Democrats have won center stage, and they will have to begin putting up and start shutting up.

When you have a two-house majority, “It’s Bush’s fault” simply won’t cut it as a platform any longer. The people have spoken, and it seems to me the country is in the mood for results, not talk. The whiners and blamers must now step up and become the doers and achievers. Based on what I’ve seen so far, good luck with that. In any event, it’s going to be very interesting. Perhaps even entertaining, if CNN is doing the “reporting.”
Posted by Kathy Carroll at 8:39 AM

I'm heading out for a Hawaiian vacation, so I wanted to let you know that I may not be posting for a couple of weeks.

It's been a very difficult year for me, as most of you know. Some down time will be refreshing. I'll return with, hopefully, revitalized blogging energy.

Aloha for now.
Posted by Kathy Carroll at 9:16 AM

The fact that John Kerry insists he was talking about President Bush in his insulting remarks about the military is totally irrelevant to the real issues. The point is, veterans and active duty military alike are equally outraged by Kerry's comments. If he "cares" so much about the troops, that fact alone should galvanize him to issue an apology.

Let's say Kerry really did intend his offensive remarks for the president. I don't believe that for a nanosecond, but let's give him the benefit of the doubt--something Kerry has never extended to our troops. The inadvertancy is beside the point. The point is that he insulted our troops. If he had a neuron firing that wasn't completely self-absorbed, he would recognize that mistake and say he is sorry. Even Democrats are figuring that out and urging Kerry to state his remorse.

But Kerry is not sorry, and he's not the stuff of which apologies are made or mistakes acknowledged. He is arrogant, pompous, prideful, vain, and shallow. He will fling the blame every which way, except where it belongs, at his own clay feet. There will be no verbal tap dancing out of this self-created mess. Kerry himself is now beside the point.
Posted by Kathy Carroll at 8:47 AM