For as long as I can remember, I have wanted to see Pearl Harbor, the place where worldwide war engulfed our country. I looked forward to seeing the USS Arizona National Memorial as a highlight of my trip to Hawaii.

It certainly was that, yet in a depth of ways I had not anticipated. When my mother and I arrived in the morning light on November 7, one month shy of the 65th anniversary of the Japanese attack, I looked across the harbor for my first glimpse of the majestic white building straddling the lost ship, Arizona. On such a brilliant and peaceful day, it was difficult to imagine the fiery hell that had so suddenly consumed Pearl Harbor on December 7, 1941.
It made me think, also, of another spectacular sunny morning sixty years later, far to the east, in New York. Sudden tears stung my eyes, and a fist-sized lump rose in my throat, settling tightly there. I knew I would need my inner steel today. 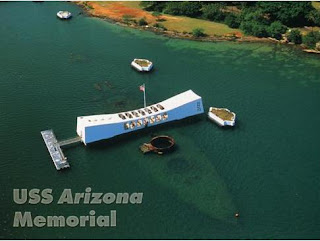 Despite the early hour, there were hundreds of visitors milling about, swarming over every square inch of the visitor center, museum, gift shop, and the outside walkways. Although most were Americans, many were from other countries, including Japan. It was heartwarming, and somehow uplifting, to witness so many people eager to visit this honored place of history. Everyone was clutching their launch ticket and listening to hear their numbers called. We were number ten; it would be ninety swift-flying minutes in the museum before we were called and ushered into the small movie theater to watch dramatic newsreel footage of the attack. After the film, the theater doors swung open to the boarding deck, and we were ferried across the harbor to the USS Arizona Memorial.

Trade winds whipped through the sunlight, tumbling the water’s surface into endless ripples and lacy froth. Fighting the screaming gusts, we stepped from the boat onto the ramp that led up to the heart of the memorial. A few moments later, I was staring down into the rusted smokestack of the Arizona. The shadows of the dead ship waxed and waned, mirrored up through the flashing waves. Despite the Hawaiian heat, I shivered with a chill born of equal parts sorrow, reverence, and pride. In the emotions of that moment, there were no words; had there been, I could not have spoken.

At the far end of the memorial is the white marble wall of honor, etched with the names of the Arizona’s fallen. I looked for, and found, a S1c named Carroll and pondered his short life and violent death. A wellspring of prayer flowed easily, almost instinctively, for my unknown namesake and his shipmates as I stood over the final resting place of these heroes. 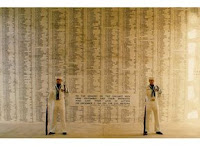 Heading back towards the boat ramp, I walked along the other side, looking out towards what had been the ship's stern. I watched the random ribbons of oil bubbling to the surface, black tears that weep through the decades. It is as though the Arizona shall never cease mourning the day that lives in infamy, never stop crying for her lost sailors and all their youthful promise, gone.

Those of the Pearl Harbor generation tell us that the military enlistment lines were around the block after December 7, 1941. I drew a parallel to our troops today, so many of whom say that September 11, 2001 inspired them to military service. Modern America is a large, spoiled, squabbling family amongst our own. But when an outsider attacks, an ironclad band of fellowship encircles us, and woe to the intruder. That was true in 1941, and again in 2001.

It will be true on the next December 7, or September 11, as that sad day will surely come. I was moved to understand that as I stood in the midst of our history on the Arizona Memorial.

Our nation’s enemies make a fatal mistake if they assume the whole of America is the sum of its empty-suited parts in Washington D.C. The angst-ridden paralysis that grips our government is born of weak leadership. But the majority of Americans still have spiritual grit and a fierce love of our home.

There is a chord of unity that reaches between the sacred waters of Pearl Harbor, Hawaii and the holy ground of Manhattan, New York. Somewhere in that span of 65 years, half an ocean, and a whole continent, if we look deeply enough past our petty differences, we Americans can view the solid core of our spirit. It is the same today, for the soldiers on watch in Iraq and Afghanistan, as it was for the first colonial minutemen. It was clearly visible through the oil-kissed waves of Pearl Harbor, and it sends the same message to those who would harm us:

Do not try to take from us our good life, which we have worked and wept to build. If you wish us ill, beware. We will protect our own.

Perhaps I am overly optimistic, but I believe this dedication to our home and freedom is still true of most Americans and will stand us in good stead, whatever dark days may lie ahead. This faith in America’s essential substance allows me to look to the future with more hope than fear. I daresay that the heroes who rest with the USS Arizona would agree.
UPDATE 1: Victor Davis Hanson measures the differences between 1941 and 2001.
UPDATE 2: And more on the difference 65 years makes.
Posted by Kathy Carroll at 7:59 PM