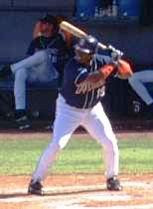 If you work hard, good things will happen.
~ Tony Gwynn
I had waited many years for July 29, 2007. When it finally arrived, I was driving 100 miles through Pennsylvania farmland, catching a cross-country plane, suffering through a weather-delayed connection, and totally missing the historic moment I had so long anticipated.

On Sunday, July 29, 2007, my all-time favorite baseball player, Anthony Keith Gwynn, was inducted into Baseball’s Hall of Fame in Cooperstown, New York. As Tony said when he got the phone call, “Validation.”

Tony Gwynn is my sports hero for a multitude of reasons. He played outstanding baseball with stunning consistency for 20 years. His five Gold Glove awards were the least of the opposing team's problems. Tony’s 3,141 career hits speak for themselves, proclaiming his untouchable supremacy at bat. He struck out only 434 times in 9,288 career at-bats. When Tony came to the plate in a clutch situation, San Diego fans relaxed. We had faith he would get the job done.

A Padre fan’s delight was to watch the opposing team scramble around the field, hand signaling each other and whispering behind raised gloves, when Tony walked to the plate. Frequently, there was the obligatory catcher’s trot out to the mound, to steady the unfortunate pitcher who had to face baseball’s best hitter.
"All I know is how I felt when Gwynn came up with a man on second," said Jason Schmidt, Los Angeles Dodgers pitcher. "And if there was a man on third? Forget it. Run scores."
The air in the stadium would hum with anticipation. A workhorse contact hitter that made the most of any opportunity, Tony was a fielder’s worst nightmare. “You just hope he hits it straight at you,” said Larry Walker, two-time National League batting champion.

But when he hit it into the hole, as he usually did, Tony made the whole city stand up and cheer. As the television commercial says, “Priceless.”

Tony hit a rare home run at Yankee Stadium during the 1998 World Series, but the Padres lost the game. “I would rather have had the win,” Tony said afterwards. The Padres were crushed in that series by the ‘90s powerhouse Yanks, but even New Yorkers acknowledged that Tony Gwynn was something special.

There are many baseball stars with more spectacular careers than Tony Gwynn, but none who can surpass his quiet integrity, both as a player and as a person. Resisting the seductive pull of wealth and celebrity, Tony stolidly placed home, family, and community above the astronomical salaries he could have commanded in bigger markets. He played for the San Diego Padres throughout his entire professional baseball career, earning the moniker “Mr. Padre” and, with it, the enduring love and loyalty of his city. In a pre-induction interview, Tony said "when you're identified with one club and one city, it doesn't get any better than that."

The charity work of Tony Gwynn and his wife within the San Diego community has been local legend for decades, although it’s difficult to get all the details. Being the true class act that he is, Tony doesn’t advertise his contributions.

Today, Tony Gwynn coaches baseball at San Diego State University, his alma mater. Just as he did when he was one of the game’s superstars, he stops to give autographs with a smile. He never allowed himself to be impressed by his achievements; he just kept demanding more of himself. In doing so, he set a gold standard for young ballplayers wise enough to learn from his example.

His lesson is simple, but not easy. Keep your eye on the ball, in life and in baseball. Work hard, and good things will happen.

Tony Gwynn, Hall of Famer. For this baseball fan, it doesn’t get any better than that.
Posted by Kathy Carroll at 8:18 PM