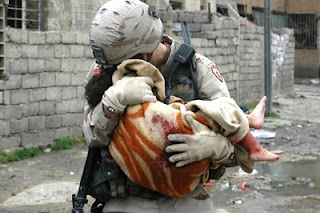 Anyone who says Al Qaeda is not one of the primary problems in Iraq is simply ignorant of the facts.
~ Michael Yon
We could argue until the next ice age over whether going to Iraq was a mistake or not. That doesn't help the reality that we're immersed in this war.
So, let's win it.
Like many Americans, I remember Vietnam and its aftermath. Personally, I don't think our national psyche has ever recovered from that debacle. Those who are fond of comparing the current war to the Vietnam war need to remember that there was no danger to us at home from the North Vietnamese. Lest we forget, that is not the case with Al Qaeda.
So, let's win it.
If you haven't yet read Michael Yon's heart-stopping reports from the battlefield, please read them. They contain all the brutal facts you'll never get from television newscasts. The most important fact being, we are at war with a cold-blooded, ruthless enemy who will murder the elderly, children, infants, the sick, and the helpless, all with equally savage joy.
Like it or not, we're in a war. So, let's win it.
Posted by Kathy Carroll at 7:51 PM