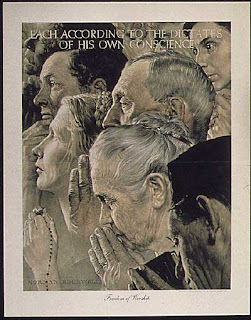 By their fruits you shall know them
~ Matt 7:20

National Review Online has extensive commentary on the Romney speech, all of it interesting and worthwhile reading. I've linked four of the articles I found most intriguing in this paragraph, but there are many more available, at NRO and throughout the internet.

I find it both mystifying and sad that Romney's campaign had to come to the point of defending his individual faith. Although couched in the very relevant context of our nation's heritage of religious liberty, Romney's speech was an explanation of how he can fit in as our president, even though his is not one of the "normal" religious denominations. Obviously, he felt it was needed.

Could there be a more un-American need? This country was born of the quest for religious tolerance, and "Freedom of Worship," as depicted by the great 20th century artist Norman Rockwell, is one of our most dearly-held principles.

I am a Catholic who is blessed with many friends of various religions and philosophies. Aside from those of my own faith, I have friends (some quite close) who are Protestants of several different denominations, including evangelical Christians, Unitarians, Jews, and Buddhists. There are a couple of agnostics and atheists among my friends. Their religions (or lack of same) are completely irrelevant, because I have one simple rule for interpersonal relationships: to be my friend, you must treat me and mine with respect, honesty, and kindness.

That's all. Be a decent person, and we can build from there.

When my children were growing up, I would advise them to watch what people do instead of just listening to what they say. "Actions scream," I told them. Their father used to put the same concept another way with his pet saying, "You can't hide what you are."

So when I consider the possibility of Mitt Romney as president, I look at his life and how he has lived it. From a public perspective, I see an enormously successful businessman who is also a former state governor with impressive accomplishments on his record. On a personal level, I see a long-term marriage that has worked well and a beautiful family of young adults who are contributing to society and raising their own children in the same value system.

Romney is a decent person. I can build from there.

Posted by Kathy Carroll at 4:00 PM