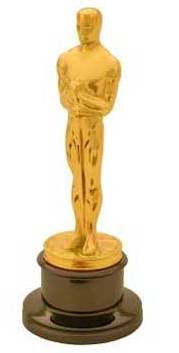 Much have I travell'd in the realms of gold...
~ John Keats

Tonight is the 80th anniversary of the Academy Awards, popularly known as "the Oscars."

The first event was not broadcast in any way and was attended by 250 people who payed $10 a ticket, which was quite a princely sum in those days. Today, you can barely go see a movie for that price, let alone attend the show biz happening of the year.

I've been watching the Oscars for over 40 years, and there have been some major changes to how the show progresses. For example, I remember the closing years of women wearing evening gloves and tiaras to the podium. They always looked so classy and elegant, giving the kind of appearance that makes the term "Hollywood royalty" seem like a worthy description of the stars.

That all seemed to change immediately after Bo Derek showed up in an Indian bathrobe-style outfit, around 1980. We are now regularly subject to such frightful visions as Cameron Diaz's bedhead-with-hausfau wrapper look in 2002. How the mighty have fallen...

It's always fun to watch, although the show now stretches longer than most labor and deliveries. Years ago, when the kids were home and the Oscars were on Monday nights, I'd rush home from work, we'd order pizza, and the whole family would regale ourselves with hilarity over the self-appointed Beautiful People who take themselves oh-so-seriously. In the last decade or so, Hollywood geniuses finally figured out that they could keep more of the East coast audience to the "Best Picture" ending if they moved the show to the weekend, so Sunday is now the treasured evening for Oscar.

I'll be watching, as usual. I've seen several of this year's nominee's, so I'll step out on that limb and name my picks for winner:

Best Actor: Daniel Day-Lewis, There Will Be Blood

UPDATED after the Oscar telecast: 4 out of 6. Better than I usually do!

Posted by Kathy Carroll at 3:04 PM