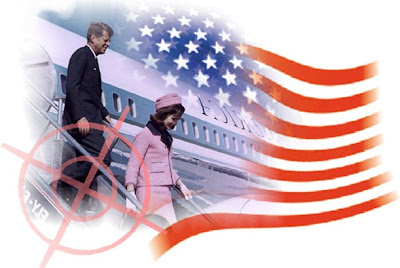 Was it Colonel Mustard in the library with a candlestick? Or Lee Harvey Oswald in the book depository with a rifle?

Or Umbrella Man with a silencer?

This is just what we need on top of Obamania and a tanking economy: more JFK assassination theories.

I've been hearing conspiracy theories about JFK's murder since my childhood. They started cropping up almost immediately after this national tragedy from which we have never seemed to recover. Dealey Plaza, the Grassy Knoll and the Magic Bullet have become painful fragments of American folklore.

I remember my father reading a book called Rush to Judgment by Mark Lane. It was subtitled "A Critique of the Warren Commission's Inquiry" and published in 1966, three years after the assassination. There's no cover image of this book on Amazon.com.

My father thought it plausible that President Lyndon Johnson was part of the plot. He remarked that before the shots, "Johnson was already on the floor of his car, looking at his watch." The 1991 movie JFK hinted at Johnson's involvement, also. But I've always thought that Dad's presentation of events was the most entertaining.

I suppose at some point in history--hopefully during my lifetime--this ill-fated president will be left to rest in peace. At least until someone finds Professor Plum's revolver on the Grassy Knoll, missing a Magic Bullet...
Posted by Kathy Carroll at 7:42 PM