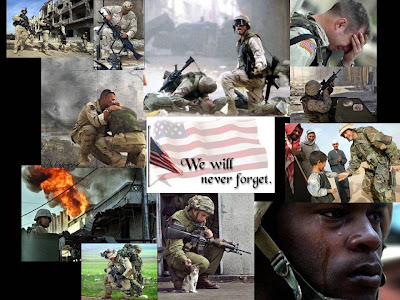 Pete Hegseth of Vets for Freedom writes of the unsung success of the surge in "Fewer Bodies on the Ground" at National Review Online.
The media elites seem so bent on hammering their anti-Bush agenda that they will not give due credit to the greatest heroes of our generation. That's worse than unfair; it's dishonest.
Check the Vets for Freedom Troop Blog if you'd like to know the truth of events on the ground in Iraq. One Marine's View is another great source of solid information.

Just because MSM doesn't want to cover the war doesn't mean it's irrelevant. This war is real, it's ours to fight, and it's not going away simply because the New York Times thinks it should.
We Americans should be united in supporting the men and women of the armed forces who stand in the breach for us.
Posted by Kathy Carroll at 8:00 PM