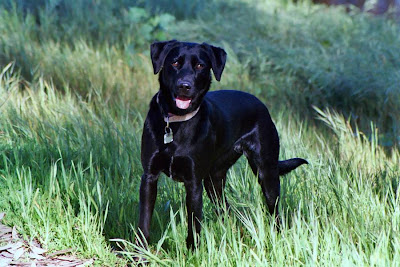 That's my dog, Riga. Isn't she adorable?
Do you want a free dog?
Today, I arrived home from church to find that she had somehow dragged the defrosting London Broil from the bottom of the kitchen sink. My living room looked like a scene out of a "Saw" movie.
She knew she was in trouble, because I yelled the unmistakable "NO!" of an exasperated dog owner. Also, she had the decency to slink off down the hallway and hide while I scrubbed the rug and picked up the shreds of plastic and pulverized styrofoam packaging.
There wasn't too much damage done to the steak, although I had been gone for well over an hour. Riga's small for a Lab, only 48 lbs. It must have taken her a while to figure out how to hang by her forepaws from the edge of the sink, scrabbling her back legs, and balance herself in order to dip her head down into the sink low enough to score this meaty prize. If I had a surveillance video system, I'm sure I could win first prize in a contest.
There were just a few chunks taken out of the side of the meat, which I was trimming as my son and future daughter-in-law arrived. They were good sports about the misadventure. I don't know how hungry I would feel if I arrived to find my dinner entree being washed and whittled after some enthusiastic canine tenderizing. Matt thinks Riga should be "punished," receiving no biscuits before I leave for work in the mornings; he contends that she should only get the goodies when I arrive home and find no damage to my home or its contents.
I'm not sure Riga would make the disciplinary connection, and this link on dog behavior seems to back me up. I'm more inclined to think a London Broil at the bottom of the kitchen sink is the Holy Grail of doggie treats to a Labrador retriever, no matter how many layers of plastic grocery bags it's wrapped in. I have to accept that human error produced this episode of Dogs Gone Wild.
From now on, defrosting items go behind closed doors--either refrigerator or microwave. You'd think I would've learned by now, considering all the breadstuffs that Riga has swiped off the kitchen counter in the past, no matter how far back they were stashed. Today, she simply found a new mountain to climb.
Old dogs, new tricks, same story. Maybe I'm the one who shouldn't get a biscuit until I get home from work.
Posted by Kathy Carroll at 7:04 PM