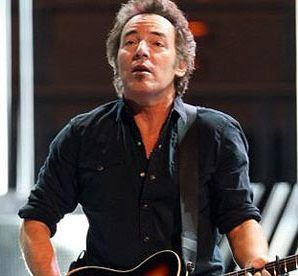 He is a left-leaning gazillionaire who believes he speaks for the lower-to-middle working class. He thinks the war in the Middle East is an unmitigated disaster, the country a tragic wreck, and our president a total disgrace and failure.

Sound familiar? It should. There’s a lot of that going around this campaign season. Now we have that highly insightful political genius, Bruce Springsteen, coming out in heartfelt support of that champion of the bitter common people, Barack Obama.

Below is a snippet of Springsteen’s deep thoughts about Obama:

"He speaks to the American I've envisioned in my music for the past 35 years, a
generous nation with a citizenry willing to tackle nuanced and complex problems…"

Oh, Bruce. You’re a fine one to be referencing “nuanced” and “complex.” If you did any homework at all, you’d know that the U.S.A. is the most generous nation on earth, and has been for a long time. All it takes is the click of a mouse to learn that one important fact about the U.S.A.--you know, "Your Hometown." You really would do better to stick with your musical shtick.

To use Obama’s words, Bruce should “cling to” what he knows and does well and leave politics to the professional fakes. He would keep more of his audience if he did. As Dolly Parton once wisely noted, when asked why she never discusses politics, people come to her shows to hear her sing. As Dolly could explain to the rather slow-witted Springsteen, the first rule of business is--don’t tick off your customers.

Not very long ago, I was a rabid Bruce Springsteen fan. I know a large percentage of his older songs, verbatim and to the nano-beat. Most of his albums are in my collection. Some of his best song writing is almost magical in its power to inspire. I’ve seen “The Boss” in concert a couple of times, and as a performer, he truly is without peer.

A few years ago, when Bruce became vocal in trashing the Iraq war and using the troops as a political chess piece, I switched off “the Boss.” I haven’t bought his last several CDs, and I won’t. His future concerts are off my to-do list, also.

My siblings are all Bruce fans, and they seem to think I should “get past the politics.” My question is, why? Why is free speech and expression fine for Bruce Springsteen, but not acceptable from me? Why should I contribute my hard-earned dollars to support this ultra-wealthy, left-wing simpleton as he uses his public platform to undermine the morale of our fighting men and women? Our troops defend with their lives Springsteen's right to bleat his destructive drivel, and I'm supposed to buy it? Even if I don’t agree with a single lone lyric?
Um, I don't think so, Boss. I believe his words and actions are demoralizing to our nation’s fighting forces and, even worse, giving comfort to our enemy.

“Last to Die” is one example of his tiresome harangue against the war. Please, spare us the recycled cliché from John Kerry’s 2004 campaign, dressed up as a lament for the troops. Most importantly, spare the troops! The vast majority of them believe in their mission. Do they need to hear this unoriginal, inaccurate, depressing garbage again? Such open concern for our troops may seem touching on the surface, until one examines the facts regarding Springsteen’s level of involvement with our military.

The facts are that Bruce Springsteen has never, not once that I can find any record of in his 35-year career, ever given a concert for members of the U.S. Armed Forces. He has never traveled to give a show in Iraq, Afghanistan, Kuwait, Qatar, LRMC in Germany, Walter Reed Army Medical Center, or any U.S. military base—although he lives practically down the street from Fort Monmouth.

So how genuine is his deep-seated angst for our troops, as expressed in his mournful caterwauling on recent CDs? It’s a large helping of left-wing political agenda, nothing more. Bruce doesn’t really give a flip about our troops, and he couldn’t care less who dies last, mistake or no. He’s nothing more than a clueless, spoiled, leftist phony who is blatantly using our military and its mission to sell his new albums.

That ticks off this Soldiers’ Angel --big time.

Although I’ll never admire him as I once did, I still like Springsteen’s music. I always will. I just won’t ever pay for it again. A retired Navy veteran, a good friend, expressed my position perfectly in a recent e-mail to me:
I have a right to have opinions and I boycott those that are overtly abusive, in my mind, of the common standards that this country was founded on. They have their right to stand up and say what they want. I defended those rights for 21 years and would defend those rights again today. I just don't have to listen to them, buy their CDs, watch their shows/movies or listen to their sponsors who are paying for something that I think is wrong.
Amen to all that, Rick, and thank you again for your service to our country.
So go ahead, Boss, write those sentiments into a song, if you can--and if you dare. It’s certainly understood that you’re no hero, but do you at least have the guts to honor our veterans--for once?
Posted by Kathy Carroll at 6:17 PM