Credit for the Conversation 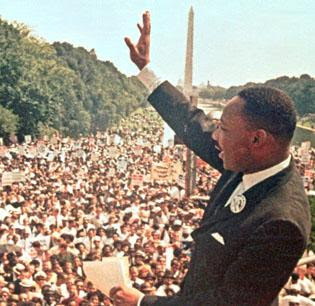 I refuse to accept the view that mankind is so tragically bound to the starless midnight of racism and war that the bright daybreak of peace and brotherhood can never become a reality. I believe that unarmed truth and unconditional love will have the final word.
~ Martin Luther King Jr.

Sound familiar? It should. Most of today's campaign buzz about "hope" and "change" was more eloquently stated over forty years ago--with real actions to back up the words.

Much of the true credit for the racial "conversation" which Barack Obama purportedly “started” belongs with Dr. Martin Luther King Jr. With dedicated courage, and at the cost of his life, Dr. King opened wide the road that led to Obama’s current path in the national spotlight.

As Cal Thomas notes in his article, it is difficult for the young people who have no memory of the 1960s to appreciate either the enormity of King’s achievements or the level of personal commitment they demanded. Those who are often enthralled with Obama for no clear reason would do well to understand history before embracing charisma.
Posted by Kathy Carroll at 8:08 PM