Exit One of the Greats 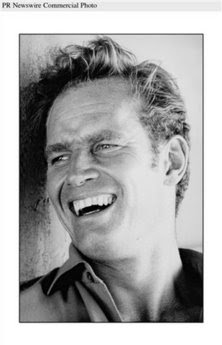 Your eyes are full of hate, forty-one. That's good. Hate keeps a man alive. It gives him strength.
~ Quintus Arrias to Judah Ben-Hur, galley slave 41
I always referred to Charlton Heston as "my favorite overactor." In truth, I think the enormity of his roles was what pushed perception of his acting over the top. Not many names in Hollywood, past or present, could successfully manage the number of imposing characters he portrayed.
What actor today could credibly portray cultural and historical icons so diverse as Moses, Ben-Hur, Michelangelo, John the Baptist, Brigham Young, Andrew Jackson, Thomas Jefferson, and the voice of Abraham Lincoln, among dozens of other towering authority figures? I can't think of one. But Charlton Heston seemed to step easily into these larger-than-life characters, bringing them alive with an intensity that often electrified the screen and helped catapult a film into the realm of the classics.
Everyone who sees the chariot race in "Ben-Hur," remembers it. The same is true of Moses' parting of the Red Sea in "The Ten Commandments," and the enraged astronaut Taylor railing at the remains of the Statue of Libery at the startling conclusion of "Planet of the Apes." The decades fall away; I can tell you which theater I was in, and who I was with, the first time I saw each of those spellbinding scenes. Once viewed, they take on a vivid life of their own, making Charlton Heston's brilliant work an indelible part of America's collective memory.
A personal favorite among Heston's many films is "The Naked Jungle," which is not well known. It makes a great "date movie," having both a romantic theme and a perilous tale of man battling beasts--tiny ones, man-eating ants. If you've never seen it, I recommend adding it to your DVD list.
Heston was an early supporter of the Civil Rights movement, and in later years became controversial for his support of the Second Amendment. He also opposed abortion and was unafraid to say so. His outspoken support of such varied causes suggests not only a complex man, but a courageous one.
Although famous for embodying powerful and heroic figures, Charlton Heston's private life was one of a quiet family man. He was married to his wife, Lydia, for over 60 years. Their son, Fraser Heston, played the infant Moses in the epic classic film "The Ten Commandments." The Hestons adopted their daughter, Holly, a few years later. With the money he made from "Ben-Hur," Heston built his Beverly Hills home and lived in it for the rest of his life. It was at home that Charlton Heston died April 5, with his wife at his side.
There are so few legends left to us from Hollywood's golden era. Last night, we lost one of the truly great ones. But through the magic of film, we are able to keep his greatest work alive. As Messala told Judah Ben-Hur with his dying breath, "It goes on...the race is not over."
Posted by Kathy Carroll at 4:11 PM