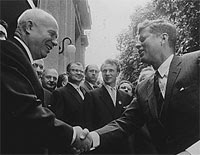 He beat the hell out of me.
~ President John F. Kennedy, of Soviet Premier Khrushchev, after the Vienna Summit - 1961

Barack Obama indignantly brands general remarks by President Bush, in which Obama is not even named, an "appalling attack" upon himself. He even gave a press conference to rant against this perceived slander.
But what's really appalling is Senator Obama's ignorance of 20th century Cold War history.
"When Kennedy met with (Soviet leader Nikita) Khrushchev, we were on the brink of nuclear war," lectures Obama, as reported far and wide by a blissfully cooperative press. I haven't seen a single MSM outlet challenge the stunning inaccuracy of Obama's declaration--probably because they haven't bothered to check the facts. And if they have checked, they know that the facts are unfavorable to Obama, therefore unreportable.
The Vienna Summit was held in June 1961. The U.S. was nowhere near the "brink of nuclear war" at that time. But Khrushchev came away from that meeting with the impression of Kennedy as soft, weak, and easily pushed around. Kennedy realized it, even stated it bluntly to a NY Times reporter, but it was too late to stop the emboldened Soviet premier from pressing forward with his plans for basing Soviet missiles in Cuba, 90 miles from the U.S. mainland.
The direct result of the friendly chat in Vienna in June 1961 was the Cuban Missile Crisis of October 1962. It was the meeting itself that propelled us to "the brink of nuclear war." Now, in light of the facts, tell me how much sense it makes for a hypothetical President Obama to sit down and attempt to smooth things out with Iran's President Mahmoud Ahmadinejad?
Petulance, arrogance, and overweening pride are bad enough character traits in a prospective president. But Obama's astonishing level of historical ignorance is completely unacceptable and outright dangerous in a would-be Commander in Chief, especially during a time of war.
Posted by Kathy Carroll at 12:06 PM