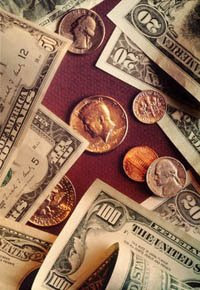 No matter which of us wins in November, there will be change in Washington. The question is what kind of change?
~ John McCain

When Obama heralds "change we can believe in," I think he's referring to what will be left in our pockets when he's done redistributing the nation's wealth. Oh yes, I know, he's only going to "tax the rich"--but that's a highly elastic definition.

I think by 2010, in an Obama presidency, "the rich" would be pretty much anyone who holds a job. Anyone who has a bank account, a retirement account, or health insurance will be considered highly privileged. He will "demand" we change, as Michelle Obama has threatened--er, promised. He will "not allow" us to stay idle. If we have worked our way up to owning a "piece of the pie" we are going to be required to "give up a piece" so that "someone else can have more."

Slow down, Mrs. Marx. If I'm the one dragging my butt out of bed every day to work and earn my little mouthful of pie, why should someone else be entitled to it? What's my incentive to achieve anything of my own, if the Almighty Government is going to tell me I have to "give up" what I've earned?

Maybe I should stay home and relax, waiting for a piece of "someone else's" pie to be forked over to me, instead.

The article linked here, by economist Lawrence Kudlow, explains why McCain is by far the better financial choice in these wildly uncertain times. Read it if you're an American voter who would like to hold on to some vestige of your monetary assets in this brave new world of $4 gas and $6 milk.

Posted by Kathy Carroll at 7:06 PM