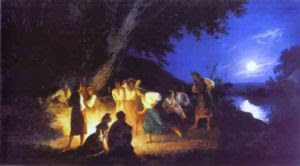 In summer, the song sings itself.
~ William Carlos Williams
Today, June 24, is the feast of St. John the Baptist, cousin of Our Lord and the courageous voice crying in the wilderness. John is a major heavyweight on the A-team of saints, right up there with Sts. Peter and Paul. Coincidentally or not, Peter and Paul share a feast day next Sunday, June 29.
All of these major league saints having feast days so close together has perpetuated the ancient custom of Midsummer celebrations throughout the ages. June 24 tends to be an international festival day right up to the present. There are all-night bonfires in many cultural celebrations around the world, including Latvia. June 24 is known as "Janis Dien"--John's Day.
I once read many years ago that one quarter of the world's male population is named some variation of the name John. I don't know if that still holds true today, although both my father and grandfather were named John. I have an Uncle John, a nephew John, and assorted cousins of various degrees, all named John. There could be some validity to that 25% theory.
I learned about John's Day early in my marriage. Pete's boss was a hyperkinetic Latvian named Janis who threw a wild party at his home every year on his name day. (My regular readers will remember that "name days" are far more important in the Latvian tradition than birthdays.) There was always unlimited vodka, lobster, caviar, and tons of other delicious food that I would be hard pressed to remember--after all, there was also unlimited drinking, dancing, and singing to be done.
To celebrate the longest day of the year, the John's Day party continued all night, ending with a breakfast feast. We never lasted quite that long, but many of John's guests did. In honor of the old midsummer night bonfires, Janis' house had torches burning outside the garage. It's a wonder any of us, let alone John's house, survived.
So enjoy yourself this midsummer's evening. Pop a cold one, light the patio firepit, and toast the season of long, warm sunny days. Laimigs Janis Dien--Happy John's Day.
Posted by Kathy Carroll at 7:21 PM