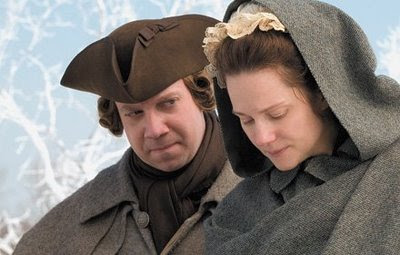 Facts are stubborn things...
~ John Adams, second U.S. president
This weekend, I finished watching the remarkable television series, John Adams.
Although I've known since 2nd grade that Adams was our second president, I knew little else about him. Abigail Adams was more far familiar to me, thanks to a book about American heroines that I read in grade school.
John Adams, brought to life by Paul Giamatti's outstanding performance, was a complex man of intelligence, virtues and foibles. His writings contain some of the pithiest quotations in early American history; some are eerily relevant today.
For example, in 1814, Adams wrote that "Democracy never lasts long. It soon wastes, exhausts and murders itself. There was never a democracy that did not commit suicide." Any number of current events would seem to validate that statement.
It is an odd coincidence of history that both Adams and Thomas Jefferson died on the same date: July 4, 1826--the 50th anniversary of the United States. Although I had learned that fact somewhere during my formal education, I had forgotten it. Upon reflection, it seems almost a heavenly blessing on the new nation. After half a century, the Founders' work was done; the young country was well established and poised to grow on to greatness.
As John Adams noted, "facts are stubborn things." While watching this film depiction of the life of one of our most significant Founders, I was reminded of the bravery, commitment and determination of the first Americans. Their sacrifices and hard work gave us all the advantages we Americans enjoy today. It's worth our time to remember them.
Posted by Kathy Carroll at 10:17 AM