Gratitude is not only the greatest of virtues, 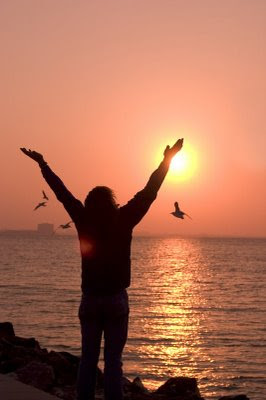 but the parent of all others.
~ Cicero

There's a great deal of bad news these days. Terrorist bombings, banks failing, industries in financial straits, city and state governments in dire straits, unemployment rising...I could go on, but we all know the gloomy picture.

So what is there to be thankful for? More than we realize. Start with your family, proceed to your health, and keep on counting. You'll be amazed at how many blessings grace each of our lives, whether we pause to acknowledge them or not.

To be thankful for what one has is to be content in life. An "attitude of gratitude" is a blessing in itself. Anyone can attain a grateful state of being; it just takes some cultivating. The wise among us invest the time and energy to do so.

Happy Thanksgiving weekend to all.
Posted by Kathy Carroll at 10:15 PM

Ordinary citizens scored only 49% on this civics knowlege quiz posted by the Intercollegiate Studies Institute. More upsetting is the fact that elected official scored even lower, at 44%.

While I don't agree politically with actor Richard Dreyfuss, I think he is really onto something vitally important with his Civics Lessons. I hope this good and timely cause gets the attention it deserves.
Posted by Kathy Carroll at 3:37 PM

These days, not too much in the news has the power to amuse me, but I laughed out loud when I read that the "Big 3" CEOs from Detroit flew into town on their private jets to make their plea for taxpayer money.

Oops. Maybe the Beverly Hillbillies pickup truck would have been a tad too far in the other direction, but don't you think the big shots might've had more luck in Congress if they had carpooled to Washington in a Ford Escape-Hybrid SUV?

Taking a private jet to ask for a handout is like wearing a 10-carat diamond ring in a soup line. It's kind of a jarring, what's-wrong-with-this-picture moment.

The planned vote on aid to the auto industry has been canceled, as of tonight. Well, too bad, but thankfully some neurons are firing in Washington. Things are tough all over, and probably will be for a very long time. The auto industry has ignored every harbinger of automotive doom in the last 35 years, starting with the 1973 oil embargo. Why should their stupidity, laziness, and/or greed get preferential treatment in the current crisis?

Like most Americans, my retirement fund is down 35%, and there's no place I can go for relief except back to work in the morning. Every morning. For many, many more years. At the rate the economy is sinking, I'll probably be carried out of the copy room one day, feet first...when I'm in my 70s or 80s.

Again like most Americans, I've managed just fine in life without stepping foot on a private jet. Money's never been much of a presence in my life, and it's even less likely to be in the future. But, unlike the Big 3 CEOs, I'm well acquainted with how to run on empty.
Posted by Kathy Carroll at 6:47 PM

So, do you think Barack Obama would pass muster if he stood in line for a job within his own administration? Based on this questionnaire, which applicants for a position in the Obama administration must complete, it's doubtful he would qualify. That third section, Relationships and Affiliations, would be a bridge way too far.

Having been put through an 18-month wringer to obtain a security clearance when I worked in the defense industry, I find it particularly amusing that Obama probably would not qualify for a clearance if he was applying as a rank-and-file government employee. But as president, he is automatically--quite magically--granted one.

I suppose he can still be fussy about his underlings. He's on the right track if he's showing more discretion as president than he did during his ascendancy to the office.
Posted by Kathy Carroll at 8:41 PM

I'm soaked through with Obama news,
I'm sloshing through tales of Michelle.
I'm sick of hearing Sarah squawk
Around the clock, as well.

On John McCain, the hour is past
For all and every late night show.
And the time has come to hear the last
Of that plumber, name of Joe.

I'm done with this election year,
Of bias, flood, and saturation.
In two months, we'll all drown, I fear
In a Sea of Inauguration.
Posted by Kathy Carroll at 7:57 PM 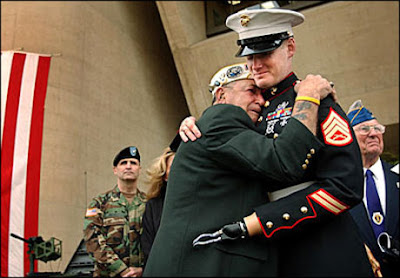 Americans, indeed all free men, remember that in the final choice a soldier's pack is not so heavy a burden as a prisoner's chains”
~ Dwight D. Eisenhower
A heartfelt "thank you" to all of our United States veterans, in every branch of our military armed forces on this Veterans Day.
Special thank-yous to my brothers Ken and Jim, my cousins Mary and Kerry, my uncles Bill, Jack, and Joe, my friends Dave, Rick, and yes, another Mary.
Thank you to my hometown heroes, the fatigue-clad neighbors I wave to as I walk my dog, Riga, each morning. I watch them climb into their trucks, driving off to report for duty at the nearby base, and I pray they will remain safe.
Thank you to every man and woman who has served our country in uniform. You are the treasure that we, as a nation, should take the greatest pride in. I can only hope that our voluntary military will stay strong and continue to attract the best of our young people under an Obama administration.
I have my doubts, but I'm trying to keep hopeful. Because, as President Eisenhower also stated, "Pessimism never won any battle."
Posted by Kathy Carroll at 6:50 PM 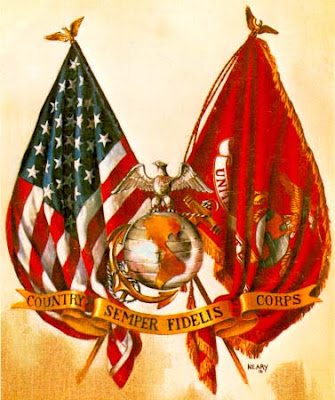 Monday, November 10, 2008, marks the 233rd anniversary of the United States Marine Corps. The Corps is older than the country.
Happy birthday to our homeland heroes. I'm fortunate enough to claim a few of your veterans in my family.
Thanks for your service, Jim, Mary, and Kerry. I don't know how you did it, but I'm certainly proud you did.
Semper Fi.
Posted by Kathy Carroll at 9:04 PM

The 2008 presidential election is, thankfully, over. My candidate did not win. Although I'm disappointed, I'm far from despondent.

I may be more conservative than the average, middle-aged, white working woman. But first and foremost, I'm an American. It's always exciting to watch our political process play itself out, with all the attending drama and fanfare that accompanies election night.

But last night was especially thrilling, because with the election of Barack Obama, America has chosen its first president of African descent. There is no denying the triumphant significance of this moment in our history. America may screw up enormously, as we did with slavery--but, given enough time and opportunity, America also rights its wrongs in a lavish way.

As an American of Irish descent, I understand the struggle of the social underdog. Thus, I watched the joyful reactions of African-Americans with a fraternal sense of happiness and an awareness that the prophetic message of Dr. King's "I Have a Dream" speech, delivered when I was a schoolgirl, was unfolding before my eyes.

Also as an American, I want our new president to succeed. He tells us that change has come. Soon, he will need to tell us what that means. The reality of the coming changes may be counter to what the 56+ million Americans who voted for John McCain want. The new president may be surprised at various times during the coming four years to find he is not the most popular man on the globe. But criticism comes with the job, as any of his predecessors will confirm. Obama's term will be no exception. His charisma can't protect him from that reality.

Obama needs to shoulder the tremendous burdens he has sought so aggressively to carry. He should not look back. There should be no pointing over his shoulder at the previous administration. Obama needs to own his own presidency. How effectively, and how gracefully, he can do so will define his success.
Posted by Kathy Carroll at 6:56 PM

How are you feeling about the election? Had enough yet? If you're like me, you're done.

Here are my stats:

Media saturation level is up by 23 points. Tolerance for the networks' Democratic cheerleading is down by 75%. Weariness with the whole repetitive, tedious, nasty process has already achieved a blowout victory.

Pending decision to trash TIME magazine immediately upon arrival, without a single glance, it is 10% undecided. My decision not to renew my subscription has already won in a landslide.

Don't forget to vote.
Posted by Kathy Carroll at 5:57 PM