I'm heading "back east" this week, to visit family.  The folks have quite an itinerary planned for me, so I'll be back online around Easter.
This certainly will be a welcome break from the news...wouldn't everyone enjoy one these days? There's no telling what may transpire in ten days time.  Who knows?  President Obama might announce May Day as a new national holiday by the time I get back.  Honestly, it wouldn't surprise me in the least.
On the bright side of that eventuality, we could all use another day off.
Posted by Kathy Carroll at 8:58 PM

The best lack all conviction, while the worst
Are full of passionate intensity.
~ W. B. Yeats
In the year 1921, the poet summed up the current troubled state of America.
I am not only depressed, but more than a little frightened by what is transpiring within the Federal government.  How far down this road do we find we have passed the last exit, the turning point at which there is no going back to the U.S.A. as we know it?
At what stage in the wild spending do we fully realize that the hope of a better tomorrow for our children, and our grandchildren, has been buried under the crushing, disinterested weight of a boundless presidential ego?
How many pointless press conferences can be held, leaving how many questions left unanswered? How many segments of industry, technology, and economy will be dismantled and reconstructed in the image and likeness of Obama's Utopian vision?  Will average Americans continue to tolerate this unprecedented chaos, or will we--as a people--rise to object?
I hope "We the People" have the will and the voice to challenge the incalculable harm that is being done to our country.  There are many trillions of reasons why we should.
Posted by Kathy Carroll at 7:58 PM 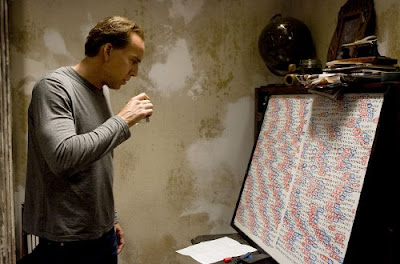 
I saw "Knowing" this weekend. Most critics are dismissing it with a condescending sniff, which does not surprise me, due to the premise (more on that later). But in deciding whether or not "Knowing" deserves a go-see, there are two things I'd like fellow movie fans to keep in mind:

1. Roger Ebert, who gave it four stars, is a fairly good judge of movies, and
2. I was so absorbed in this movie that I forgot to open my box of Raisinets.

There are several themes in the film (which is one of its weaknesses), but the primary focus tracks the journey of Nicholas Cage's character, John Koestler, through the depths of grief and the hopelessness of lost faith to a growing comprehension of a grand design in the universe. Herein lies the rub for most MSM movie critics. If the plot line moves our main character towards an acceptance of a Higher Power over earthly events, it's irrefutably stupid. (Or so that towering intellect, Bill Maher, would proclaim.)

Most of us probably wonder at one time or another about the "end of the world." If you're planning on going to see "Knowing," you might want to look up Mark 13:32 beforehand.  Just to steady your nerves, also to remind yourself that it's just a movie.

The special effects are breathtaking, the suspense is unrelenting, and the stunning ending is a tricky blend of disaster and hope. The movie stalls a bit during the climactic scene between Cage's character and his young son; director Alex Proya could not resist drawing it out in the Close Encounters/E.T. style.

The children do an outstanding job, particularly Chandler Canterbury as Caleb, Koestler's son. Nicolas Cage, not one of my favorite actors, makes me forget how much he usually annoys me. To a dedicated movie-lover such as myself, quite set and definite in my tastes, this is no small feat and one hallmark of a truly good movie.

If you'd like to be entertained and made to think at the same time, go see "Knowing." You'll leave the theater knowing that today--and what we do with it--is what counts.
Posted by Kathy Carroll at 1:41 PM

No disrespect to your office, but people are starting to notice that you can't seem to disconnect from campaign mode. I realize that all the cheers and applause can be addicting--especially these days. But excuse me, you've got to get real. You've got far too much to do.

You've gone from no real job (except campaigning) to the most difficult job in the world. Oops! Quite a transition. Don't hurt yourself.

The TV spots can wait for better days. It's time to park the plane, put down the sports page, and get to work.
Posted by Kathy Carroll at 7:50 PM

The Irony of it All

President Obama seems absolutely "shocked, shocked," that AIG is acting like Big Business. He declares it "outrageous" that $165 million in bonus money was paid out to managers at the bailed out AIG.


Has he taken a look at the numbers in his budget? ("Your winnings, sir.") Now, that's something to be outraged about. $165 million barely equals one of those tiny little earmarks the president vowed he would never allow, slipped into the pork feast by one of those lobbyists he said he would never hire.


And tell me again, why do we have someone who couldn't figure out how to pay his taxes correctly for four years now running the IRS?


But, like a continuing financial crisis, I digress. Back to those bad boys, AIG. Well, contractual obligations and all that, harrumph, the bonuses had to be paid no matter what the circumstances. But excuse me, where would AIG be without the taxpayer bailout? Insolvent, right? So, would the bonuses get paid if the company was bankrupt?


Hopefully, AIG can pull its collective head out of its overstuffed feeding trough long enough to understand the angst of Jane and Joe Taxpayer. But then, again, they're Big Business, so no, not really. Just keep forking over the dollars, Little People. As for the increasingly perturbed President Obama, that formerly self-promoting answer man of the world is learning just how much he really doesn't know.

Posted by Kathy Carroll at 7:20 PM

Fred Barnes of the Weekly Standard sums up "Obama's Quirks: What we've learned about our new president." It's interesting, if somewhat depressing, reading. Of the five traits Barnes noted, the most unattractive is "blame game."
To me, there is nothing more ungracious and less classy than the constant verbal bricks Obama tosses backwards towards President Bush. Such bad-mouthing and blaming smacks of a mean spirit, as well as an insecurity about his own abilities to rise to the task before him. The four years stretching before Obama must look very long indeed.
They certainly look that way to me.
Posted by Kathy Carroll at 7:58 PM

The Image of Incompetence

If we’re honest with each other, we know that sometimes, on both sides of the Atlantic, we have drifted apart, and forgotten our shared destiny.
Barack Obama ~ Berlin speech, July 24, 2008


Now, what's all this about President Obama returning the bust of Sir Winston Churchill to the British Embassy? You know, the post 9/11 gift to President Bush from Prime Minister Blair. No room for that dust collector in the Obama Oval Office.

It took less than one month in office for our fearless (or should that be graceless?) new leader to send Sir Winston packing. So much for "shared destiny."

During Prime Minister Gordon Brown's visit, there was little fanfare and a lot of gaffes. Among the flubs was a demotion of the British from an ally of "special relationship" to "special partnership," no state dinner, no remarks to the press, a tacky gift of DVDs, and the lame excuse that Obama was "too tired" to fuss over his guest.

This is the man who was going to restore America's image in the world? And it's only seven weeks into his term. I shudder to think of the diplomatic damage that is yet to come. Clearly, Obama has no clue on how to conduct himself in foreign relations. As an American, I'm mortified at his boorish behavior towards our closest ally.

A set of DVDs, just like you see on sale at Target, as the official gift to Britain's Prime Minister? Blimey. Rather rude, that.
Posted by Kathy Carroll at 7:15 PM

Rhyme for the Recession 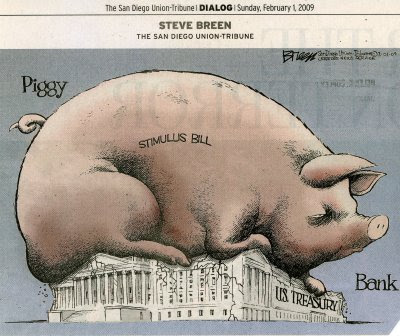 Victor Davis Hanson has his own improvement list for President Obama, and he really nails the most tedious and dishonest traits of our new leader.

I have never understood "Obamamania." The man has never impressed me. I've always thought he was all talk, no walk. I've never felt an iota of trust in a single word he ever said.

So when even Time magazine seems to have the stars knocked out of its eyes, and when Democratic senators start peeling away from consensus with the president's unending spend-u-lous bills, there may be a few cracks appearing in the Obama veneer. It's an encouraging sign that a famous remark attributed to the real Abraham Lincoln, is, in fact true:

Posted by Kathy Carroll at 7:40 PM 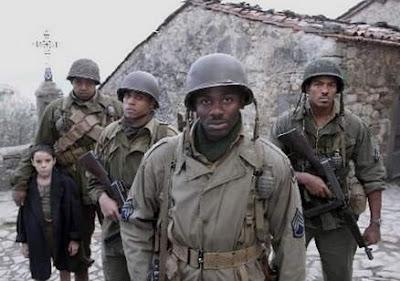 This was our time to be children.~ Arturo to Angelo, Miracle at St. Anna

I'm not much of a Spike Lee fan, but when Miracle at St. Anna was released last year, I wanted to see it at the movies. It received some merciless drubbings from a wide swath of film critics and disappeared from theaters before I was able to get there.
I remembered it, though, and waited for the DVD. I watched it a couple of nights ago, and I'm not over it yet.

Some of the criticisms are valid. Yes, there is a bit too much going on in this film. There are too many story threads, too much self-indulgence by the director--even too many miracles, from what I could see. It's overlong by at least a quarter hour (although I didn't notice the time while watching it). Also, I found some of the race-activist dialog the characters engaged in at least a decade ahead of its time.

All that being said, I think it's a good movie. My criterion is simple. Any film that holds my thoughts long after viewing qualifies. Two days later, I'm still remembering the winsome character Angelo and the touching relationship between him and his "Giante Cioccolato" (Chocolate Giant), the raw and gripping depictions of war's brutality, and the uplifting final scene that gently closes the circle on a harsh and bitter journey.

I also liked the fact that the Germans and Italians spoke in their native languages, rather than in English with those distracting phoney accents. Consequently, there are a fair amount of subtitles to read, but I found that to be worth the effort.

Miracle at St. Anna. If you can bear a movie depicting the terrible violence and waste of war, it's a thoughtful addition to your list.
Posted by Kathy Carroll at 6:10 PM