A Call to Liberty 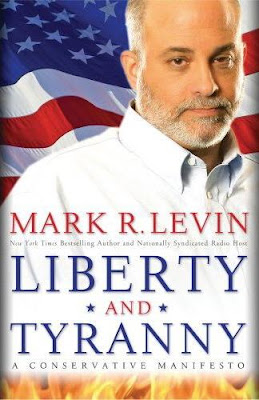 Wandering the shops during an airport layover on my way home, I decided to treat myself to Mark Levin’s new book, Liberty and Tyranny, A Conservative Manifesto.

A treat it was, indeed.  I did some flying of my own during my cross-country flight, almost finishing the book by the time the plane touched down.  In my opinion, Levin has written one of the most important books of the last quarter century.  I’ll share some thoughts on why I’ve come to that conclusion.

If you’re like myself, an average, hard-working American conservative, you’ve probably observed the economic and social Armageddon engulfing our country and wondered, on numerous occasions, “What has happened to us?”  When the Ninth Circuit Court of Appeals overturns California voters' majority voice; when media personalities call Christianity more dangerous than radical Islam; when Congress passes legislation granting bonuses and, just as quickly and with as little thought, passes another law rescinding those bonuses; when the Executive branch of government decrees that private enterprise must now “report” to them—these are all occurrences that beg the question, “What would our Founders say?”

In Liberty and Tyranny, Mark Levin has answered that question in a clear and compelling manner.  While his response is alarming, it is fascinating and enlightening.  Levin refers to those who worship larger government as “Statists.”  With a firm basis in our Founders’ philosophy, Levin describes in layman’s terms exactly how binding are the constraints that government has imposed upon our people under the guise of helpfulness—and how diametrically opposed our modern condition is to the Founders’ original intent.  His analysis is presented in the clear but detailed style of a professor who knows he has smart students, and he teaches with a wealth of facts, bolstered by quotes and footnotes, that provide a sobering look into the ever-deepening abyss that is our increasingly centralized government.

There is a chapter titled “On the Free Market” that, in and of itself, is worth the price of the book.  If you would like a lucid, rational chronology explaining the governmental missteps that have brought us to our current woes, read it.  The heavy hand of government--in the subprime debacle, Wall Street’s bad loans, spiraling gas prices, and many other of our economic ills--is exposed at every bad turn of events, and that grasping hand reaches forward from the distant past to drag us into our modern crisis.

When I was very young, I considered my father a bit of a radical when he referred to the much-revered Franklin Roosevelt as “the worst president in American history.”  Dad became a Republican during the New Deal and never wavered in that political affiliation. After Jimmy Carter’s disastrous turn at the executive helm, I began to understand my father's position; never again would I vote for a “Statist” for president.  In reading Liberty and Tyranny, I feel rather proud that Dad’s reasoning was so accurate and so far ahead of his time.  I also feel grateful that, by example, he taught me critical thinking.

Levin’s book should be read by every college student—in fact, I’ve heard many of them calling into his radio show after reading it, along with law students and young people starting out in their careers.  It gives me hope that the soul of our nation, if not its ailing body, is alive and well.  For, as Levin wisely points out, the true conservative’s values--love of individual liberty, reluctance to expand central government, honor for cultural traditions, and respect for "Nature's God"-- are the same as those of our nation's Founders.

Posted by Kathy Carroll at 8:01 PM