For a Sunday Afternoon

I've always liked Dolly Parton, and I think she gives her customary good performance with this song. It has a message worth contemplating, too. Just a thought for a Sunday afternoon.
Posted by Kathy Carroll at 3:04 PM

I just took an online poll by the Washington Times that shows 94% of those voting in favor of scrapping the healthcare bill and starting over from scratch. A sickly 4% of those polled think we should soldier on with the legislative monstrosity. That leaves 2% probably too ill to vote.
A Rasmussen poll shows that only 28% of American voters think the country is headed in the right direction. A whopping 65% in that poll think we're on the wrong track. That leaves about 7% still trying to figure out what's hit us in the past year or so.
I'm in the majority numbers in both of those polls. Unfortunately, I'm 100% sure that it doesn't matter.
Posted by Kathy Carroll at 8:23 PM 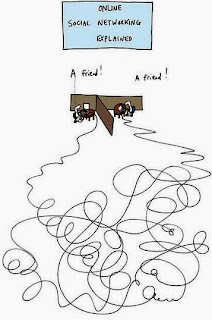 Okay, how many of you are on Twitter? How many are on Facebook or My Space? What about Plaxo or LinkedIn, sites that my daughter calls "Facebook for grownups"?

In addition to all of this online activity, how many of you are blogging or texting, sometimes while simultaneously talking into your bluetooth and/or checking your multiple e-mail accounts?
Was it so long ago that we could read, drive, or have dinner with friends in peace, without all the ringing, dinging, and pinging? What the heck happened?
I do have accounts on Twitter and Facebook, but I scarcely ever go near them. Facebook is especially fertile grounds for "cyber-stalkers," my pet name for the contacts who can't be alone for a second and gleefully pop up with an IM the instant you log on, eager for an online chat.
Please, technophiles. Show some cyber-mercy. I stare at a computer at least nine hours a day, then come home to my bursting inbox. "Social networking" has turned into a whole new workday after hours.
I refuse to believe I'm alone in my tech-weariness. At least some of you must have the same 10,000-byte stare that I have these days. Yet here I am, posting another entry to my blog. Enough of the tyranny of technology! It's time to start a "Tech Party," to reclaim our personal time for ourselves...wait a second...
Is that your cell phone, or mine?
Posted by Kathy Carroll at 8:40 AM