Every time an old person dies it's like a library has burned down.
~ Unknown
Her name was Helen; she was my mother-in-law for thirty-eight years.
As the end of World War II drew near, Helen and her parents fled with the clothes on their backs as Stalin's tanks rolled triumphantly towards her village in Latvia. Those who stayed behind, including many in her family, were executed, imprisoned, or became serfs to the brutal rule of Soviet Communism.
She spent seven years in displaced persons camps, first in a German camp, later escaping to an American camp that held out hope of immigration to the U.S. She married her husband, my late father-in-law, in the camps. Her eldest child and only daughter died of pneumonia at age three in the hospital barracks. That same day, she gave birth to her first son, Peter. When Peter was still an infant, Helen arrived in the U.S. with her husband, child, and parents.
She spoke no English, but learned enough to get by while working as a nurse's aide. She had a second son in America, took care of her parents up until their deaths, worked hard and prayed faithfully every day of her life. In later years, she cared for her ill husband for years before his death, and then she nursed a sick family friend until his death. Five years ago she endured the death from cancer of her son Peter, my husband.
The past couple of years, Helen was in a nursing home on the East coast. At the very end, her surviving son and her only granddaughter--my daughter Kristine--were both with her. I'm so grateful they were there; after all she had given in life, Helen deserved that comfort.
Helen died today, at the age of 93. Now all those personal stories of loss, pain, terror, hardship, and hope in the wake of the second World War have gone with her. I will never be so close to a person who experienced firsthand the great global cataclysm that was World War II. It's not just a part of my life that's ended; it's a chapter of history gone, one often overlooked and almost forgotten. I wrote about it several years ago; it's linked here. If you can find the time, please read it, because the story of the Baltic states is now untold. Not enough people know what the people of the Baltic republics suffered. In view of today's headlines, the story of tyranny and how it flourishes in silence is worth relearning.
As for Helen, I can never thank her enough for her son, for my children, for the love she showed all of us. For the delicious gingerbread cookies at Christmas, for the pierogs on special occasions, for the apple pie from heaven, for all she did for everyone.
Paldies, Mom. Thank you. Please give Pete a kiss for me, too.
Posted by Kathy Carroll at 7:11 PM 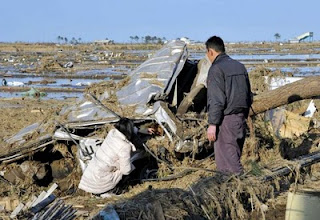 You may be just someone in the world, but you are the world to someone.
~ Anonymous

The scenes from Japan following the earthquakes and tsunami are all terrible, but it’s hard to conceptualize such devastation. The sheer vastness of the disaster overwhelms our comprehension.

Of the hundreds of images I’ve seen, the entire tragedy can be compressed into this one photo of two parents looking at the body of their daughter inside a mangled car. No matter how many pictures I see of fires raging through cities, smoke billowing from nuclear plants, piles of twisted debris, or cargo bins scattered like broken Legos, I come back to this one photo of a family in ruins.

The mother is crouching and reaching into the wreckage towards her dead daughter; the father is standing back a bit, arms slack at his sides, as though trying to absorb the shock of his loss and the fact that he is unable to help. This picture tells one family’s story. These bereft parents represent untold thousands of personal tragedies that are unfolding across Japan.

Devastation can strike any country at any time. In our busy and comfortable lives, we can easily forget that we are mortal. For now, it is Japan’s turn to remind us.
Posted by Kathy Carroll at 8:23 AM

Fate vs. Free Will 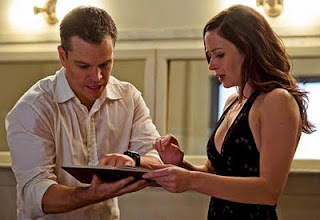 The newly released film, The Adjustment Bureau, confronts the eternal question of free will vs. predetermined fate. Do human beings exist in the confines of one or the other, or are both forces at work in each individual life?
Because this concept is a compelling one, and because I heard the director interviewed last week, I decided to see this movie. Was that fate or free will? There's no telling, but it was an entertaining decision. Matt Damon is pitch-perfect as David Norris, the charismatic political candidate who falls in love at first sight with the beautiful Elise, played with soulful enthusiasm by Emily Blunt.
However, their love affair is "off plan," according to the Adjustment Bureau enforcers. These mysterious, super-human beings control and direct our destinies. Whether they are angels, devils, or something altogether different is not addressed. But one thing is for certain--they can really ruin your day.
There are some humorous aspects to these creatures that I suspect are unintended. For example, they need to be wearing some kind of hat to have any powers at all--even a baseball cap will do. Water impedes their effectiveness, putting the viewer in mind of Oz's Wicked Witch of the West. Also, during the movie's innumerable chase scenes, the Bureaucrats are in constant search of which magical door to open next to continue pursuit of their target. For a film junkie like myself, that's too close to the Marx Brothers for serious viewing.
But the film moves at a rapid clip, with the action always layering towards the satisfying conclusion. Set in New York City, the exterior shots give a gritty feel for the city and some lovely panoramic scenes. While in the theater, I had the sense of watching a lengthy, upgraded episode of The Twilight Zone. "You unlock this door with the key of imagination..."
And don't forget your '50s style fedora.
Posted by Kathy Carroll at 4:15 PM