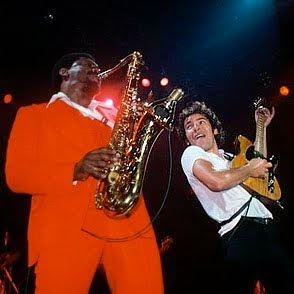 With the passing of Clarence Clemons, it's the end of a rock music era.
David Remnick's piece in The New Yorker, BLOODBROTHER: CLARENCE CLEMONS, 1942-2011 is a wonderful tribute to a unique rock legend. The synergy between Bruce Springsteen and Clemons was a musical force of nature that electrified their concerts. Rock fans shall not see such magic onstage again, and the music world is poorer for it.
If Springsteen was the head, heart, and hands of the E-Street Band, then Clemons was the soul. I'm glad I got to see him play.
Have a good time making music with the angels, Big Man.
Posted by Kathy Carroll at 10:04 AM

Susan worked down the hall from me, in another department. Our jobs had no overlap, but we knew each other from the coffee station and the restroom. We always seemed to be in each of those places at the same time, and we laughed that our biorhythms were in such close sync.
You can learn a lot about someone by talking over a cup of coffee or a bathroom sink. Susan was near my age. I knew she had been fighting cancer for a while. She was always cheerful and matter-of-fact about it. I never saw her have a down day. She was a more rabid baseball fan than I am, and she had the baseball bat earrings to prove it. Occasionally I would stop by her desk to view the current month's page on her Padres team calendar, and I would bemoan the pain of being a baseball lover in San Diego. Ever the optimist, Susan always believed that this year, the Pads had a chance.
Susan was doing well for a long stretch, but then she had a setback and was on leave for a few weeks. She returned to work for a brief time, towing a small oxygen canister on a cart behind her, still smiling. The last time we talked at the coffee machine was months ago. Susan was wearing her oxygen nose clip. Knowing from our many conversations that she was single, I asked her if she needed anything. Did she have enough help at home?
"Oh, I'm fine!" Susan assured me. "My ex has been really wonderful, helping me out." With characteristic cheerfulness, she settled that point and changed the subject.
It wasn't long after that day that Susan was on medical leave again. We got word late today that she died this afternoon. I didn't know her very well, but what I knew of her I liked very much. She was someone I could easily have been good friends with.
Sometimes at the coffeepot or the bathroom sink, we would talk about going to lunch "someday." It never happened. And I'll always be sorry it didn't.
Posted by Kathy Carroll at 7:42 PM

Of Eagles and Idiots 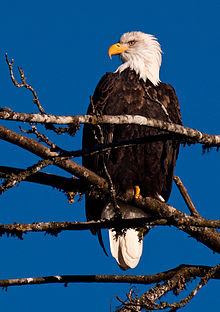 “Bald eagles attack post office at Alaska port,” screams yesterday’s Reuters headline. It’s as though a feathered Al Qaida faction has executed a well-planned sneak attack on the nation.
The article really does seem to attribute malicious intent to our national bird. Read this excerpt:

And for the second consecutive year, they have been trying to chase off
people -- apparently unaware that the Postal Service uses a stylized eagle as its logo. (emphasis added)

As my Uncle Bill would say, “Holy Crow!

So the eagles are “apparently unaware”? Even if you were “apparently” trying to be funny, that’s a stupid statement in a news story. They’re eagles! There’s no “apparently” about it—they are definitely “unaware” of anything except what eagles are supposed to do. Do you expect mom & pop eagle to check the evening news, or maybe enter a few keywords on Google, before defending their chicks?

I can just hear the exchange between the “aware” Mr. & Mrs. Eagle. It would go something like this:

“Look, Maisy, we’re the national bird. And we appear on the USPS logo. We can’t be diving at human beings at the post office. It’ll make us look bad and probably cause some idiot reporter to give us a negative write-up in the papers.”

“But Chester, we’re instinctively programmed to protect our babies and keep people away from the nest! Remember, we bald eagles were an endangered species not so long ago.”

“I know. Well, I’ll e-mail the crows and seagulls to see if they can help us out by crapping up the joint so the folks will want to stay away from the post office for awhile.”

“Okay, dear, but until you hear back, I’m going to dive-bomb those humans just like our parents and grandparents did when we were chicks!”

Seriously, Mr. Rosen. They’re eagles, not enemies. And your attitude is for the birds.
Posted by Kathy Carroll at 9:27 AM

Ten Reasons Why Weiner Should Resign—Now

2. He distributed smutty photos online, conduct unbecoming a Congressman (at least, in theory).

6. He is unfit, because of his actions, to hold office representing U.S. citizens.

8. He says he is taking “full responsibility” for his actions—where are the consequences?

10. He is perverted, craven, depraved, disgusting, and probably mentally ill.

Oh, and did I mention this reason? He is a liar.
Posted by Kathy Carroll at 10:29 AM 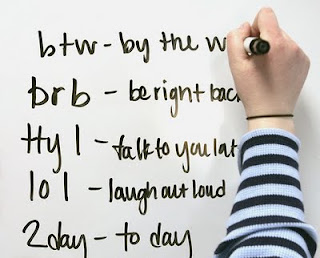 Or words to that effect. What with Facebook, Twitter, and unfettered, non-stop texting, we're in uncharted language territory today, with wildly fluid boundaries, and written communication can get scary very quickly. A code book often would be helpful, so I've linked one here.

The prolific craze of techie code words can be quite unsettling to an old English major such as myself. I was raised to follow the book--the book being the dictionary. If a word wasn't included in my father's leatherbound Webster's dictionary, published 1937, it was not acceptable for discourse in our home. When "ain't" was added to the dictionary as a legitimate word about fifty years ago, Dad termed it a "concession to ignorance." Naturally, as a lover of the English language with such a purist background, I tend to look askance at the brave new world of creative spelling.

However, I realize that we need to be practical--and understood. Language is organic and dynamic; it evolves. To communicate effectively, speakers and writers must accept the new. As an example, unlike the speakers of Elizabethan English, nobody says "God's blood!" today when they're outraged. In fact, no one has said that for quite some time. That expression has been archaic for hundreds of years. Although considering the crudity of many modern expletives, and the confusion of so many morphing shortcuts, a return to Shakespearan dialect might do us all some linguistic good.

As for the newfangled cyber renditions of words, often packing a sentence-full of meaning into a tiny letter/number combination, I find Stendahl's quote especially relevant today--"I see but one rule: to be clear."