What would you do if you lost your job?

Perhaps a better question is, what did you do when you lost your job? A disturbingly large portion of American workers have lost their jobs in the past three years. Personally, I’m on my second job since October 2008—and I’m grateful to be working at all.

My routine never varies when I lose a job (note the use of the present tense—having also lost a job in the early ‘90s recession, my resume is always at the ready).

I come home with my checks: final paycheck, unused personal time payout, any severance payment. I sit down and run the numbers to see how much is there, total. Then I deposit the checks in the bank and turn to my checkbook. I pay the bills—mortgage, car payment, utilities first, in that order. Credit cards get paid next, as much as I can manage, with a modest amount reserved for groceries, gas, and emergency cash.

I apply for unemployment insurance. The most frequent comments I hear about this handy little cushion are “it’s nothing!” or “how does the government expect you to live on that?” Well, it is something. Unemployment checks have always helped me with monthly bills during the times I’ve been out of work. And the government doesn’t exist to support me. That’s my job. Unemployment insurance payments are supposed to be temporary, although I understand some people today are trapped in them by the lack of gainful employment available in our country due to the debt-exacerbated recession.

But back to the question, how do you handle not having enough money coming in? The answer may not be easy to accept, but it’s a simple, two-step process. You conserve what money you have, and you cut expenses wherever you can. Magazines, exterminator visits, manicures, lunches with friends will all have to go, at least for a while. At least until you have a paycheck coming in again.

At no time during my periods of unemployment have I called Visa or Mastercard to request a higher credit limit so that I could continue to spend as I did while I was employed. I’m guessing that most unemployed Americans wouldn’t make such an irrational request, either. The fact that most of us are on the same page in our common sense approach to too much debt and not enough cash flow is the reason we aren’t quite sympathetic to President Obama’s insistence on more taxes. Especially at a time when so many unemployed Americans have exhausted their unemployment insurance with no sign of a new job on the economic horizon.

It’s time to stop spending money we don’t have, Mr. President. For someone who’s supposed to be so smart, you’re astonishingly dense on this issue. Just ask any American who’s been out of work since you became president. They can tell you there are no more checks in the mail.
Posted by Kathy Carroll at 10:05 AM

The problem is structural: Not enough people do not enough work for not enough of their lives. Developed nations have 30-year-old students and 50-year old retirees, and then wonder why the shrunken rump of a "working" population in between can't make the math add up.

By the way, demographically speaking, these categories – "adolescents" and "retirees" – are an invention of our own time: They didn't exist a century ago. You were a kid till 13 or so. Then you worked. Then you died. As Obama made plain in his threat to Gran'ma last week that the August checks might not go out, funding nonproductivity is now the principal purpose of the modern state. Good luck with that at a time when every appliance in your home is manufactured in Asia.

- Mark Steyn: Obama the man without a plan

Posted by Kathy Carroll at 4:36 PM 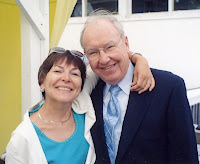 To use one of his favorite expressions, my Uncle Bill was made of stern stuff. He certainly wasn’t one for doctor visits. When he was processed out of the Navy at the end of World War II, he received a physical exam. In all the years following, eyeglasses were his one concession to medical care. At 84, he was hale, hearty, and the very essence of senior independence.

So when he suffered a serious stroke last month that rendered him disabled and bedridden in a hospital, I knew my uncle would not want to remain in that condition.

He is entwined in my earliest memories, a secure and steady force throughout my life. A member of “The Greatest Generation,” Uncle Bill is part of our national history as well as my family. As a 17-year-old boy just out of high school, Bill needed his father’s signature to join the Navy and go off to war. Raised with strong faith and solid principles, he knew right from wrong and never had trouble articulating either. Such strength of character is rare today and growing ever more precious.

For many years, each time I visited my mother on the East Coast, Uncle Bill made the long drive to pick us up and treat us to lunch. We always thoroughly enjoyed our special day, laughing and trading stories about old times.

Uncle Bill had served as a radio operator in the Navy. During one overnight visit at my grandmother’s house, my breakfast cereal box contained a toy Morse code clicker. My uncle seized it happily and called me from the table. “Come on, you need to learn the code!” We both flopped down on my grandmother’s living room floor, Uncle Bill’s tall, lanky form stretched out opposite me, with the little plastic clicker between us. I can still hear him calling the signals as his long fingers tapped expertly, “Dit-dah-dit-dit-dit-dit-dah...” Then he would spin the clicker around to face me and say, “Your turn,” briskly coaching me on whether to tap a “dit” or a “dah” as I spelled out my name. I was perhaps six years old, but I was completely enthralled. Through the bright prism of remembrance, I can see our two heads close together, hovering over that tiny toy on my grandmother’s carpet, as though it were yesterday's adventure and not a memory half a century old.

It’s always so surprising, the fond memories that nestle deep within us and spring up like geysers of light when we least expect them—sometimes painfully, often with joy, but always with gratitude for those special moments that once were but never will be again.

My Uncle Bill died this morning. I know that was his wish, but it is so difficult to let him go. Another pillar in the architecture of my life is gone. Another of my heroes has left me behind. Today I realize again that all my life’s heroes have by their actions so clearly defined for me the virtues of integrity, courage, kindness, faith, loyalty, and love. And none of them more so than my dear Uncle Bill.

For the rest of my days, I shall remember.

Posted by Kathy Carroll at 8:50 PM 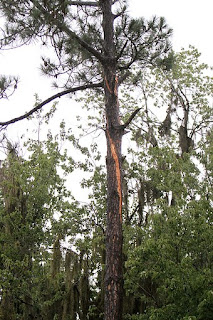 Within hours of the "not guilty" verdict, lightning struck a tree next to the site where Caylee Anthony's remains were discovered. I suppose one could blame it on the fact that Florida has more lightning strikes than any other state.
But that tree? Struck on that day? Seems rather biblical to me. Speaking of which, an article that provides thoughtful, spiritual commentary is linked here.
Was the lightning strike a freak coincidence or divine wrath? As with so many mysteries attached to this murder case, only God knows.
Photo: George Skene, Orlando Sentinel 7/8/11
Posted by Kathy Carroll at 8:06 PM