It's an ordinary snapshot of a snowy winter morning, taken from the deck of an upper floor condo. There's nothing remarkable about the picture, really. 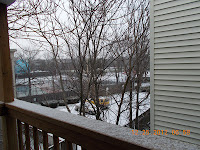 But this photo was taken on Christmas morning in Boston's Cambridge neighborhood, from my daughter's back doorway. Not only did I get to spend Christmas with her and my baby grandson, I got to watch snow falling as we had coffee and opened our gifts.

Like spending time with a first grandchild, being surprised by a white Christmas was a gift that money just can't buy.
Posted by Kathy Carroll at 6:39 PM

I would love to have seen this live and in person. And perhaps to have chimed in. What fun! Watch for the amazed little boy in the GAP sweatshirt. Priceless.

Merry Christmas to all. Hallelujah!
Posted by Kathy Carroll at 6:43 PM 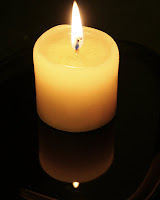 I've seen a lot of bad news in my lifetime, beginning with the 1960s assassinations when I was a schoolgirl. Some of the tragedies, like 9/11, were especially terrible. But never in my life have I watched television news with tears running down my face until yesterday, as reports from Newtown, Connecticut were broadcast.

Words are inadequate. There is nothing anyone can say. But if you can find a prayer in your heart for those families in grief, please send it their way.
Posted by Kathy Carroll at 8:51 PM

A State's Right to Work

Once upon a time, I belonged to a union.

It was at my very first job, when I was a teenager. I don’t recall the exact penny amount of minimum wage back in those faraway days, but I know it was less than $1.70 per hour. I worked part-time at the long-defunct A&P grocery store, after school on weekdays and all day most Saturdays.

On my first day at the job, I learned that a condition of employment was membership in the Amalgamated Meat Cutters Union. Never mind that I had been hired as a cashier and thus had nothing to do with the butcher. I had to become a union member, or become unemployed. Dues were $50 per person, regardless of wages, and they had to be paid in short order after being hired. That was a hefty fee for a kid making a buck-and-change. So my mother paid the $50 out of her own checkbook to keep me in the union’s good graces. I handed the check to the manager of the meat counter and paid Mom back out of my first several paychecks. Considering that my take-home pay averaged between $25 and $30 per week, it took a few months for me to reimburse my mother’s household account.

I don't know that I ever received any benefit from paying my union dues. Although after one year on the job, I did receive a dime-an-hour raise.

At the time, I didn’t think this system was fair. My opinion hasn’t changed in the intervening decades. I still don’t believe that coerced participation in a union is correct in a supposedly free country. It seems Michigan is now one of two dozen states that agrees with me.

The Amalgamated Meat Cutters was the only union I ever joined. I have been stalwart in my avoidance of any job that smacks of unionism throughout my working life, right up to today. It’s just a personal preference, based on that early experience that left an enduring sense of injustice on an impressionable 16-year-old. I know many people who are union employees, and most are pleased with the arrangement. That’s good for them, great. But when people want to break away from a unionized system and are demonized, harassed, and threatened because of their wish, then something has gone terribly wrong with “life, liberty, and the pursuit of happiness.” Because intertwined in all three of those unalienable rights we find our right to work.

The presidency is not a monarchy. There is a mysterious and feisty spirit afoot in our country, an underlying sense of calm resistance and subtle rebellion. After President Obama's razor-thin victory, we are watching states assert their rights in ways that have not been seen in modern times. To date, close to two dozen governors are refusing to implement state-run exchanges to facilitate Obamacare.  Now, with Michigan joining their ranks, two dozen states are insisting upon freedom from labor union control by passing their individual state's right to work legislation.

Governors have clout, and the majority of them now are Republican. A state's rights, be they in labor or in legislation, are issues that are here to stay.
Posted by Kathy Carroll at 8:06 PM


King--I mean, President--Obama declares he "won't compromise" on taxes, a statement which brings to mind a quotation I read many years ago that is very timely to this moment in our history:

"If men will not be governed by God, they will be ruled by tyrants."

It's going to be a very long, tedious, and probably dangerous four years.

Posted by Kathy Carroll at 1:15 PM

Betty McIntosh, now age 97, was a reporter with the Honolulu Star-Bulletin when the bombs fell on Pearl Harbor 71 years ago today. She filed a story on the attack's effects on the civilian population that the paper wouldn't publish due to the graphic details it contained.

The story appears in today's Washington Post for the first time, a vibrant link to a solemn day in our nation's history from someone who was there and lived through it. McIntosh concentrated on women and children in her reporting, presenting a rare perspective of what is remembered as a military battle.

As Pearl Harbor survivors grow ever more scarce, Betty's story becomes even more precious. Thanks to the WP for publishing it.
Posted by Kathy Carroll at 1:26 PM 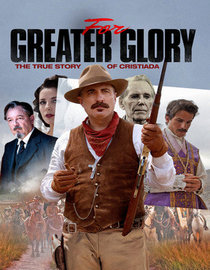 Last weekend I watched the movie For Greater Glory, whose label pronounced it a "true story." Even allowing for dramatic license on the part of the movie makers, I learned more than I expected to.

An atheistic Mexican government administration persecuting the Catholic Church in the 1920s sounded like fantasy to me. However, a few mouse clicks proved that it is an actual historical event. Andy Garcia plays the hero, General Enrique Gorostieta, who leads the rebels in their bloody fight for religious liberty.

The young Mexican hero Jose Luis Sanchez del Rio, played by Mauricio Kuri, joins the rebel army as a young teenager. At the film's conclusion, viewers learn that Jose was beatified by Pope Benedict XVI in 2005.

Aside from being a good movie, For Greater Glory was quite an education. It is heavy on violence, but that's unavoidable in telling this story. And it's always fun to watch Peter O'Toole no matter where he shows up--although playing an aged priest in Mexico is a stretch, even for him. Still, with quality stories now so rare in movies, I recommend watching it.
Posted by Kathy Carroll at 9:11 PM